Russia’s Invasion of Ukraine Is Changing the Taiwanese Military 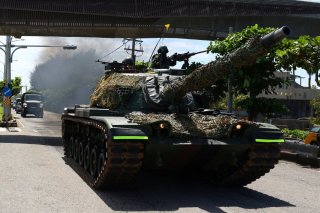 Russia's invasion of Ukraine and the United States’ limited response to an endangered non-treaty ally like Taiwan has forced Taiwan to reflect on its ability to deter a potential Chinese assault. This realization is not the first wake-up call for Taiwan's decisionmakers regarding military reform.

In August 2021, the Taiwanese witnessed America’s failure to effectively handle the situation in Afghanistan. A severe schism thus emerged in Taiwanese people's hearts and minds on the U.S. commitment to defending Taiwan in the event of a Chinese invasion. Now, both the ruling and opposition parties call for strengthening Taiwan’s military capability. Meanwhile, Taiwanese president Tsai Ing-wen has vowed to pursue “self-reliance,” which suggests that Taiwan has to enhance its self-defense capability to defend itself.

Long before the Russo-Ukrainian war broke out, Tsai’s 2020 presidential campaign in Taiwan centered on defending Taiwan against China’s aggression after Hong Kong’s compromise on the “One China, Two Systems” policy and its autonomy from China. The U.S. government has urged Tsai to conduct military reforms amid a paradigm shift toward competition between the United States and China. Besides extending conscription, the advised reforms included purchasing asymmetrical weapon systems and providing robust training to Taiwan’s reserved forces.

The Tsai administration is seriously contemplating altering the current length of military conscription from four months to one year. Although the Tsai administration asserts a policy assessment is still underway, many young Taiwanese males believe this change will take place due to the overwhelming public support for it. A recent poll showed that over 70 percent of Taiwanese citizens support the extension of mandatory military service to one year. This suggests that the majority of Taiwanese believe military reform is necessary to enhance Taiwan’s self-defense capability against a possible Chinese invasion. The poll also provides a strong mandate for President Tsai to proceed with military reform.

However, the significance of these results is being questioned because most respondents polled have already finished their compulsory military service duties or do not have to serve. It is uncertain whether young Taiwanese students and recent graduates near the law-binding service age would respond as favorably to the poll. In a lopsided live poll conducted during Taiwanese vice president William Lai’s public speech at Minghsin University of Science and Technology, most respondents voted against the extension of mandatory military service, with many citing the fact that they were college students. Moreover, the public has misgivings about the potential extension. For instance, many critics of compulsory military service have doubts about the “one-year blank period” and point to disruptions to conscripts’ careers, inefficient use of their time, and skepticism about the military’s ability to fight against the potential enemy, the People’s Liberation Army.

The biggest challenge for the Tsai administration in expanding military conscription comes from the upcoming local and mayoral elections in November 2022. Taiwanese politicians are naturally reluctant to extend military service because the duration of conscription was reduced from one year to four months in 2013, the reversal of which may be viewed unfavorably by young voters. Many youths support the ruling Democratic Progressive Party (DPP) and made up a large voting base for Tsai’s 2020 victory.

President Tsai won’t suffer direct political consequences from extending military conscription, as she is in her last term. However, as DPP chairperson, she must consider the party’s future while pursuing her political agenda. Making a significant change to military conscription may be a game-changer in the forthcoming election, potentially creating opposition among Taiwanese youth. The DPP is eager to regain several mayoral and city councilor seats after suffering defeat in the 2018 local elections.

Beyond the pressure within the DPP to forestall her decision on extending compulsory military service, Tsai faces more obstacles ahead. The government will need to coordinate measures to accommodate an increased number of active-duty military personnel. These changes will necessitate an enormous increase in Taiwanese defense spending, which already reached a record high of around $13.3 billion in 2022.

The government also needs to revise its military training program to make the service meaningful. If not, it will further exacerbate the negative public image of Taiwan's compulsory military service, which will squander eight additional months of training for young Taiwanese soldiers. To achieve meaningful results, the revision must have a strong training plan and extensive implementation from the Ministry of National Defense and related agencies. There will also be an uneasy transitional period for military members and institutions.

Taiwan's defense minister, Chiu Kuo-cheng, expects to see a plan regarding military reform proposed by the end of 2022, with changes enacted the following year. However, it is unknown if such a major and complex policy shift can be implemented effectively within a year of the transitional period. Additionally, it is still unclear whether President Tsai has the political capital to pursue conscription reform given the political stakes for her party.

To Reform or Not to Reform?

The decision to extend compulsory military service is mainly a political issue in Taiwan. Implementing this policy depends on the political will of the DPP, particularly Tsai, who is aware of the tradeoffs between military deterrence and future political support. Admittedly, it is true that refining and enhancing military conscription to one year with proper and more professional training could certainly enhance Taiwan’s asymmetric capabilities. However, to comprehensively and permanently bolster Taiwan’s military deterrence, military reform should also make a standing military the cornerstone of Taiwan’s national defense.

On the one hand, China may interpret this move as a provocation by the DPP, which may further deteriorate cross-strait relations. On the other hand, the United States may favor this adjustment, which would show that Taiwan is determined to defend its homeland. To this end, the Tsai administration must be prudent in balancing U.S.-China-Taiwan triangular relations and Taiwan’s military reform agenda. In addition to military reform, the Tsai administration should seek avenues for negotiations with China and leave diplomatic solutions on the table to prevent cross-strait tensions from escalating to another crisis.

Ray Weichieh Wang is a senior student of diplomacy and international relations at Tamkang University. Currently, he is a visiting student who majors in diplomacy and political science at Sungshin Women’s University in South Korea.

James Yifan Chen is an assistant professor at the Department of Diplomacy and International Relations of Tamkang University, Taiwan. He has a wide range of research interests including American foreign policy, U.S. government and politics, China’s foreign policy, and Korean Peninsular security.