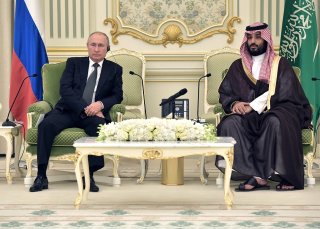 Russia’s invasion of Ukraine is likely to have ripple effects worldwide, including to global energy markets. Signs of those effects began to appear on Thursday.

According to The New York Times, oil prices jumped to near $100 a barrel for a seven-year high on Thursday. The invasion could lead to sanctions that cut off Russian energy from the rest of the world, affecting supply and driving prices even higher.

RBC Capital Markets’ Helima Croft wrote in a note to clients, according to the Times, that “some of the financial sanctions under consideration in Washington could make it challenging” for oil companies to continue operating in Russia.

Gas prices have been inching gradually higher early in 2022 with the uncertainty surrounding Ukraine a major reason why.

GasBuddy, in its most recent weekly gas price update, noted that the average gas price in the United  States had risen for the eighth consecutive week, going up another 3.2 cents to $3.52 a gallon. This past week, at least, was largely about the Russia-Ukraine situation.

“With tensions still very high that Russia may invade Ukraine, gasoline prices kept moving higher, tugged by the rising price of oil as the market concentrates on possible outcomes from the situation that could affect global oil production amidst recovering demand,” said Patrick De Haan, head of petroleum analysis for GasBuddy, in the blog post. De Haan said that with talks looking positive for a new Iran nuclear agreement, “a new deal could bring Iran’s crude oil supply back to legitimate markets, helping to ease a slight portion of supply concerns.”

Another report this week found another angle related to Russia and gas prices.

According to The Intercept, there’s another reason why gas prices have been rising: “Collusion” between Russia and the Saudi regime.

“Moscow’s partnership with Saudi Arabia has grown dramatically in recent years, granting the two largest oil producers in the world the unprecedented ability to collude in oil export decisions,” the report said.

The same publication reported late in 2021 that the Saudis resisted repeated attempts by the Biden administration to lean on OPEC+ to increase oil production and alleviate gas prices. The relationship between the Saudis’ de-facto ruler, Crown Prince Mohammad bin Salman (MBS), and the White House is not nearly as cordial as it was during the Trump era.

“Putin and MBS have much in common, including murdering their critics at home and abroad, intervening in their neighbors by force and trying to get oil prices as high as possible,” Bruce Riedel, a senior fellow at the Brookings Institution, told The Intercept. “Putin will do MBS a great service if he invades Ukraine and sends oil prices through the roof.”