Russia’s Massive Vostok Military Exercise Was Intended to Prepare for War With China. So What Happened? 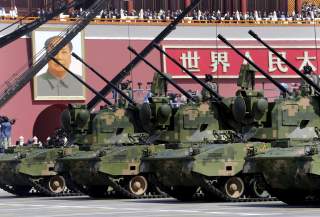 In August 2018, Russian defense minister Sergei Shoigu announced that more than three hundred thousand personnel of Eastern and Central Military District would engage in the country’s largest ever military exercise, Vostok 2018. Supposedly, the five-day exercise (September 11–15) will involve a thousand aircraft, nine hundred tanks, all major Russian airborne units, and ships from the Pacific and Northern Fleets, making it “unprecedented in terms of geographic scope and the strength of command and control centers and forces due to participate.”

The previous Vostok exercise in 2014 had also been mammoth in scale, involving between 100,000 or 155,000 troops, 1,500 tanks, and 70 ships. Vostok means ‘East’, which points to the geography of the exercise. While last year’s Zapad 2017 war games took place in Western Russia and Belarus, and pointedly simulated a war with neighboring NATO states, Vostok will take place in Siberia and the Far Eastern region of Russia.

Rapid mobilization of aircraft and ground forces in Western Russia to the Far East were features of earlier Vostok exercises. But does that mean Russia is seriously worried that battalions of American Abrams tanks will launch a land invasion across the Bering strait?

Of course not. The Vostok exercises were originally intended to prepare for a knock-down, drag-out fight with China.

Though obscure to many in the West, border clashes during the 1960s and 1970s may have brought China and the Soviet Union closer to fighting massive ground war, or even nuclear war, than Warsaw Pact ever did vis-a-vis NATO. While Moscow-Beijing relations have significantly improved since that low point, both major military powers remain wary of potential future strategic rivalry.

Thus, while many commentators have focused on the massive scale of Vostok 2018, (which likely involves some creative accounting of participating troops) arguably a more notable aspect is the invitation of a contingent of 3,200 Chinese troops. If Vostok isn’t meant to defend against China, Moscow and Beijing alike will have everyone know it is because of the “very aggressive and unfriendly” international environment they blame upon the United States.

Does this signal a new security alliance between Russia and China? The differing statements from foreign capitals are revealing both of national communication styles and differing contexts.

Kremlin spokesman Dmitry Peskov stated that Chinese participation shows they are “cooperating in all areas.” However, the Chinese defense ministry stated the exercise “enhancing both sides capabilities to jointly respond to various security threats” and was not directed at any particular third party. Chinese security analysts have been quick to clarify that participation in Vostok 2018 does not herald a new Sino-Russian military alliance. After all, China and Russia have already engaged in several joint exercises this year, including one organized by the Shanghai Cooperation Organization.

Still, China’s participation an exercise originally intended to prepare for war with China is an interesting development. Chinese media has been emphasizing the PLA, which has not fought a war since a brief invasion of Northern Vietnam in 1979, hopes that it will glean new techniques from Russian combat experience in the Syrian Civil War.

According to Chinese media, the troops dispatched include elite soldiers drawn from the Northern Theater Command, as well as thirty aircraft and nine hundred “pieces of military hardware.” The Chinese contingent will largely remain at the Tsugol training range near the juncture of the Russian, Chinese and Mongolian borders.

Photos were later released of at least thirteen Type 99 tanks and two infantry fighting vehicles crossing into Russia by train at north-eastern border city of Manzhouli. The Type 99 is China’s most advanced tank, and has rarely been deployed abroad.

The participation of Mongolian troops also highlights past regional divisions. China’s Qing Dynasty conquered Mongolia in 1690, and the majority of Mongols today live in the Chinese autonomous region of Inner Mongolia. However, after World War II Moscow intervened on behalf of an independent Mongolian republic in Outer Mongolia and coaxed Beijing into recognizing its independence. The nation of three million has remained closely allied with Russia ever since, though relations with Beijing improved significantly in the post-Communist era. Nonetheless, Mongolia’s vast but sparsely populated plains effectively serve Moscow as a strategic buffer with China.

The exercises have elicited a mild non-complaint from NATO, which was invited to observe back in May, though reportedly have caused consternation in Japan, which has territorial disputes with both Russia and China. Russia is simultaneously holding large-scale naval exercises in the Mediterranean involving around thirty ships, believed to be in advance of operations in support of a Syrian offensive in Idlib province.

Ultimately, both Moscow and Beijing see the Vostok 2018 exercise as a shot across the bow of Washington’s dominance in international affairs. The two authoritarian governments hold a shared interests in opposing a liberal international order valuing norms of democracy and human rights, which they perceive as undermining their internal stability and justifying Western military aggression.

However, while both states may oppose American hegemony, they pursue fundamentally different objectives for which neither would sacrifice itself to aid the other: Moscow is preoccupied with maintaining its dominion over neighboring buffer states in Eastern Europe and Central Asia, while Beijing is looking to cement de facto control over the South China Sea.

However, China is also seeking to expand its influence into Central Asia, particularly by building an economic corridor through its New Silk Road initiative—a move which could threaten Russia’s long historic influence over these former Soviet client states. Moscow also happens to be major arms supplier for India, which Beijing sees as a strategic rival.

These differences won’t necessarily lead to war, but they do highlight that though China and Russia may both hold grievance with U.S. hegemony in common today, they lack deeper shared interests. More significant cooperation would require Moscow and Beijing to change their historical tendency to for short-term transactional relationships, admittedly a political style also in vogue in Washington of late. A security alliance like NATO, which some Chinese security analysts look upon with envy, is founded upon making common political commitments that may fly in the face of short term self-interest.

In that light, Russia’s invitation of Chinese troop into Vostok 2018 may be an early attempt to foster deeper Sino-Russian security cooperation. Whether such a project will sustain equal appeal to both Russia and China—whose fortunes are moving in profoundly different trajectories—remains to be seen.