Russia’s MiG-29 Fighter: Can It Be Saved From Becoming Obsolete? 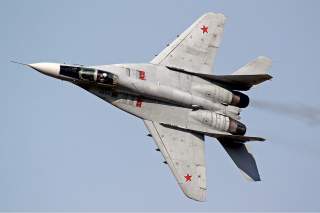 Russia’s fourth-generation MiG-29 light fighter aircraft was conceived in the 1970’s as an affordable Soviet option alongside the more high-end Su-27. The MiG-29’s cost-effective production cycle allowed it to be mass manufactured as a popular export product. It became one of the most widely-purchased fighters, used everywhere from India to Peru; even the US purchased 21 MiG-29’s from Moldova as part of the Cooperative Threat Reduction (CTR) Program.

But whatever its past laurels, the base MiG-29 model is showing its age with archaic radar technology and relatively low fuel capacity. The Russian air force is accordingly pursuing several concurrent projects modernize outdated aspects of the MiG-29 while preserving its dogfighting potential.

These include over a dozen variants that, like the MiG-29SE and MiG-29K, focus on improving specific functions ranging from improved radars to missile add-ons. The MiG-35 is being developed as a more comprehensive redesign of the MiG-29 with sophisticated ECM (electronic countermeasures) and greater fuel capacity. While the MiG-35 could potentially phase out the MiG-29 over the long term, recent news suggests that some iteration of the MiG-29 is here to stay.

Acting director of Russian aircraft engine manufacturer Klimov, Alexandr Vatagin, gave the following statement to the official television channel of the Russian military earlier this week: “We are developing an engine for a light fighter aircraft. When talking about the production of a fifth-generation fighter, then that would be a heavy fighter. But of course, we have not abandoned our belief that the RD-33 engine still has potential and can be used as a foundation for a more modern engine, to be added to the ranks of fifth-generation engines with a load of up to 11 tons. We are working on this.”

The Klimov RD-33 engine was a key part of why the MiG-29 was so cost-effective to mass produce but is increasingly seen as a technical bottleneck amid efforts to update the aging jet. This “fifth-generation” engine seems to be something other than the RD-33MK, developed for the MiG-35 in 2001. Neither was Vatagin referencing the Saturn AL-41, a heavily upgraded iteration of the Al-31 slated the Su-57 strategic stealth fighter.

What, then, is the “fifth-generation” engine being produced for certain models of the MiG-29 and 35?  Specifications were not offered at the time of writing, but Vatagin’s repeated use of the term “fifth-generation” is a descriptor consistent with a focus on improving some of the RD-33’s most glaring shortcomings: greater fuel efficiency, longer service life, and maneuverability enhancements.

On the heels of recent reports that Russia could be developing smaller hypersonic missiles for the Su-57 and potentially other aircraft, a more powerful engine could also enable modified variants of the MiG-29 and 35 to carry a more diverse range of weapons.

The development of this engine is also likely tied to the Kremlin’s 2017 announcement of a new “fifth-generation” light fighter to be operational by 2025. According to then vice-premier Dmitry Ragozin, “I hope that, within the framework of this government defense plan, this plane will already be flying [by 2025].”

It seems highly likely that the new fifth-generation engine being developed on the foundation of the RD-33 will be tested on current MiG-29 and MiG-35 models, to prepare it for serial production alongside Ragozin’s recently announced aircraft.