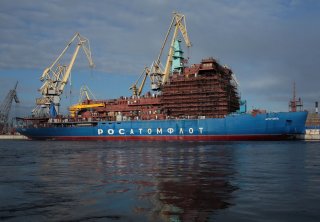 Despite ongoing global warming, the Arctic is one of the world’s coldest locations—and Russia may be one of the countries best positioned to get ready to take it. Not because of any new hypersonic missiles or somewhat stealthy jet designs, but because of icebreakers. Meet the Arktika-class nuclear-powered icebreaker.

The Soviet Union was the original progenitor of Russia’s icebreakers. The first of the Arktika-class was built in the early 1970s, and the class was represented by 6 hulls, though most of the earlier boats were retired in the 2000s and 2010s.

Like many icebreakers, the Arktika-class features a double hull design. The thick steel plating allows the Arktika-class to crush ice without crushing the hull itself. Though thick, the outer hull is significantly thinner that the inner hull, and the space between the hulls can serve as a ballast container for seawater taken onboard.

One of the other features unique to icebreakers is their prow shape. In contrast to most ship prows which are narrow and pointy, icebreaker prows are much less hydrodynamically efficient, that is less “sharp.” This actually serves them quite well.

A common misconception is that icebreakers ram pack ice to smithereens, using brute force to carve holes though which other ships can sail. In actuality, icebreakers break ice using their weight. A more gently-shaped prow allows icebreakers to slide upwards onto the ice, and crack it from above. They essentially sit on the ice until it gives. Though not a particularly fast class on the open ocean, the Arktika-class can break ice that is two to three meters thick, or about six to ten feet.

In addition to a strong hull and bow, the Arktika-class comes equipped with a bubbler system that shoots jets of hot steam below the surface of the water. This steam weakens the ice directly in front of the Arktika-class’ path by making it a bit thinner, which make ice both easier to break, and makes the break location more predictable.

The Arktika-class is of course nuclear powered. Two nuclear reactors power the Arktika-class’ three screws, or propellers, which can be moved in both the port and starboard directions to aid maneuvering in tight spaces. Rather than needing to be refueled, which would limit the icebreaker’s range and operational tempo, the Arktika-class has virtually unlimited range, and is hindered only by crew necessities, food and water. Even damage sustained by the big ship isn’t a problem. The Arktika-class is equipped with spare parts, including propellers, that allow the ship to refit while at sea, depending on the extent of the damage.

As the Earth warms, icebreakers are becoming even more relevant. Whichever country has an interest in the Arctic area will still need to break through some ice, though there will be less ice in the future. Whoever gets there first wins—and Moscow just might beat everyone to it.