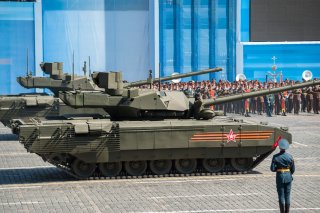 The Armata main battle tank might be the best in the world, though so far it’s been hindered by painfully low production numbers.

“The state trials [of the T-14 Armata tank] will come to a close next year. It will actively go into serial production from next year,” Russian Industry and Trade Minister Denis Manturov said to TASS, though the ultimate veracity of Mr. Manturov’s statement is difficult to determine with a definitive degree of accuracy.

The T-14 Armata made its public debut to great fanfare at Red Square in Moscow during Russia’s 2015 May 9th parade, commemorating the Soviet Union’s victory of Nazi Germany during World War Two. At the time, the tank splashed across headlines around the world and was lauded for the myriad advanced features seen on the platform. This, despite the fact that one T-14 reportedly experienced a break-down during parade rehearsals just two days before the May 9th parade.

The T-14 is, at least on paper, an incredibly formidable design. It is the flagship of the Armata Universal Combat Platform, a chassis that is used for a surprisingly wide variety of new Russian armored vehicles, including the T-14, tank, a tank support vehicle, an armored repair and evacuation vehicle, command and reconnaissance vehicles, a self-propelled artillery vehicle, and several others.

It sports a wide 125mm main gun as well as a remotely operated 7.62 general-purpose machine gun in the turret and thanks to an autoloader, requires a scant three crew members. These three sit within an armored capsule in the hull front, which in keeping with Soviet tank design, features a steeply-sloped front hull glacis and is quite squat and low-profile.

In order to better tackle the muddy terrain endemic to Russia in spring and fall, the T-14 also sports wide tracks, which afford the sub-50 ton main battle tank low ground pressure and therefore good off-road mobility. The turret and body sport a variety of active and passive protection measures, making the T-14 quite possibly one of the best

The primary reason for the slow T-14 rollout? Money, or rather a lack thereof. Time will tell if this time around the T-14 can enter mass production.