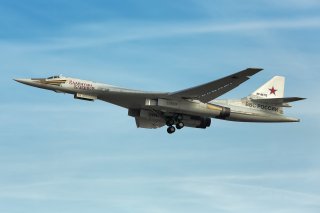 Russia’s Tu-160M strategic bomber has been compared at times to the U.S. Air Force’s B-1 bomber, and both have been steadily upgraded since entering service. While the B-1B bombers in the American fleet recently completed a modernization, which was the largest and most complicated modification of the Cold War-era aircraft, the Tu-160M has undergone its own major update.

This week the press office of the United Aircraft Corporation (UAC) announced that a heavily upgraded Tu-160M performed a debut flight with new NK-32-02 engines.

“At the aerodrome of the Kazan Aircraft Factory, a subsidiary of the Tupolev Company (part of the UAC within the state tech corporation Rostec), a heavily upgraded Tu-160M missile-carrying bomber with new serial-produced NK-32-02 engines performed its debut flight,” the UAC press office statement said as reported by Tass. “The aircraft was piloted by the crew under the supervision of Anri Naskidyants. The flight proceeded at an altitude of 6,000 meters and lasted 2 hours and 20 minutes.”

The bomber also received an update to its systems including avionics, which were tested during the flight.

“According to the crew’s data, the flight proceeded in the normal mode and all the systems and equipment operated without a hitch,” the UAC said.

The Tu-160 is a multimode supersonic strategic missile-carrying bomber that features a variable-sweep wing design. Despite its age, Moscow announced its decision in 2015 to restart the production of the Tu-160 strategic bomber in its upgraded Tu-160M version at the Kazan Aircraft Enterprise.

In February of this year, the first heavily upgraded Tu-160M prototype derived from an operational Tu-160 bomber was flown for the first time. The upgraded bomber featured advanced flight and navigation equipment, communications, a new radar and electronic countermeasures system. The Tu-160M is capable of carrying up to a dozen strategic cruise missiles on two multi-position rotating launchers inside the fuselage.

It was also announced that the Tu-160M2 will be getting the same onboard communications suite as Russia’s fifth-generation Su-57 air superiority fighter.

In addition to being the largest and heaviest bomber ever built, the Tu-160 is also the fastest. While the B-1 Lancer, which is smaller, is more of a bomber in the classic sense, the Tu-160 was developed as a stand-off weapon platform where missiles are launched from the bomb bay.

The Soviet-designed Tu-160 is notable in that it is the only bomber of the Cold War-era employed by the Soviet Air Force not to carry any defensive weapons. Speed has largely been its greatest defense, and it was capable of reaching Mach 2.05 or roughly 1,380 mph while flying at 40,000 feet.

The new Kuznetsov NK-32-02 engines are also the largest and most powerful engines ever fitted on a combat aircraft and can produce some 55,000 pounds of thrust in afterburner. This could give the speedy bomber even more pep.

In September, a pair of Tu-160s took part in a record-setting twenty-five-hour flight over the neutral waters of the central part of the Arctic and Pacific Oceans as well as the Kara, Laptev, East Siberia, Chukchi, and Barents Seas. The aircraft were refueled mid-air three times from six IL-78 tankers.