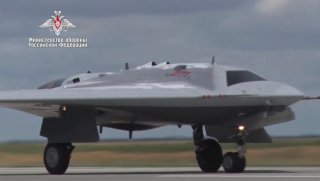 The Russian Ministry of Defense revealed video footage of the latest variant of the S-70 Okhotnik unmanned aerial vehicle. In the video, the Okhotnik can be seen towed out of an aircraft hangar as officials pose for photos around the fuselage.

A caption accompanying the video explains, “the roll-out of the UAV (Unmanned Aerial Vehicle) marks the completion of the assembly of the product as a whole, equipping it with all the necessary onboard equipment in accordance with the requirements for flying vehicles, and the transition to comprehensive ground testing in preparation for the first flight.”

A tweet from Russia’s United Air Corporation aerospace conglomerate also showcased the new UAV and explained that the Okhotnik jet nozzle is “flat” and presumably stealthier than the original Okhotnik variant.

The original Okhotnik design sustained sharp criticism for the various surfaces and antennas protruding from the fuselage surface, which could severely hamper the aircraft’s stealth profile. Still, that original attempt may have been an exploratory platform rather than an effort to field a genuinely stealthy tactical UAV.

By comparison, this latest S-70 Okhotnik variant appears to be significantly more sophisticated, with particular attention to reducing the UAV's radar signature. To that end, this new Okhotnik features a redesigned air intake outlet and a flatter exhaust nozzle integrated into the flying wing body that would presumably reduce the UAV's heat signature.

Russian media sources have previously dubbed the Okhotnik—which means hunter in Russian—a heavy strike drone that would fly in tandem with Russia’s Su-57 Felon stealth fighter. As a loyal wingman-type UAV, the Okhotnik could presumably compensate for some of the Su-57’s deficiencies, particularly in contested environments or situations where a highly stealthy airframe would be necessary.

RIA Novosti, a Russian state-owned news agency, cited defense officials and defined the Okhotnik as a “highly intelligent system capable of solving a wide range of tasks individually, in a group and together with manned aircraft.”

Russian defense minister Sergey Shoigu stated, “we hope that the work will be completed by 2022 and we will be able to sign a large long-term contract for these drones, as is now the practice in the armed forces. This is needed so that the industry is aware of how to build plans for the next ten years and order materials and other components,” at the Novosibirsk-based Chkalov Aircraft Enterprise.

Still, Russian defense production timelines, especially for complex land and air projects, are notorious for missing production targets. While the new-and-improved Okhotnik does appear to be a significant upgrade compared to its predecessor design it's uncertain when it would enter service.