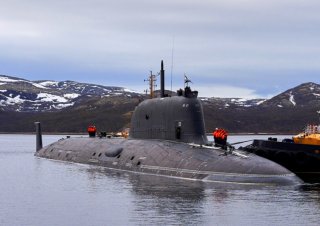 “The Novosibirsk submarine is planned to be put into service by the Russian Navy before the end of the current year,” a defense industry source told TASS, a Russian state news outlet. “During this time, at least four launches of Onyx and Kalibr-PL cruise missiles will be performed, including salvo firing using both types of missiles.”

Rear Admiral Arkady Navarsky, a top Russian Navy official, confirmed in late October that the Novosibirsk and Krasnoyarsk Yasen-M submarines will join the Pacific Fleet; the two vessels are slated to be commissioned in late 2021 and 2022, respectively. The Pacific Fleet will reportedly receive a third Yasen-class submarine, Perm, in the mid-2020s, with the rest of the line going to the Northern Fleet.

The Yasen class is a modernized line of cruise missile submarines intended to phase out the Russian Navy’s aging inheritance of Soviet-era attack submarines. The new class has a submerged displacement of roughly 1,300 to 1,400 tons and a top speed of about thirty-five knots. Introduced in 2009, the Yasen-M upgrade package is meant to account for the sixteen-year gap between the first and second Yasen vessels—Severodvinsk and Kazan. The “M” revision includes armament upgrades, modernized onboard electronics, subtle hull optimizations, and design changes intended to reduce the submarines’ noise output.

Boasting a new single-hull design that’s more common among western submarines, the Yasen-M class is shaping up to be the quietest attack submarine line ever commissioned by the Russian Navy. Though likely still edged out in acoustics performance by the U.S. Navy's Virginia-class submarines, the Yasen class is set to considerably narrow the stealth gap that persisted between Russian and U.S. submarines throughout the Cold War.

The new submarines’ ten vertical launch system silos support as many as thirty-two Oniks or forty Kalibr-PL anti-ship cruise missiles. The ability of Yasen-M boats to salvo-launch Kalibr-PL and Onyx missiles was confirmed earlier this year by Russian defense sources. But the submarines’ arsenal will be headlined by the formidable new 3M22 Tsirkon winged anti-ship hypersonic cruise missile. The missile boasts a top speed of Mach 9, or 6905 miles per hour, and can maneuver mid-flight, posing a salient threat to current U.S. and NATO missile defenses. Russian military observers believe that Tsirkon can hold U.S. carrier strike groups at risk and substantially impede the effectiveness of the Navy’s carrier air wings.

Of the eight Yasen-M submarines planned to be commissioned by 2028, three have been launched and one—K-561 Kazan—has entered service.