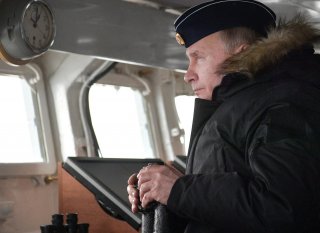 Russia and Iran have kicked off a series of joint naval drills in the north Indian Ocean, with China and India also joining in.

The Iranian Army’s press office reported earlier this week that the Russian and Iranian Navies will stage joint exercises on Feb. 16. The drills will cover an area of around seventeen thousand square kilometers, involving anti-piracy and counterterrorism operations as well as maneuvers against aerial and naval targets. The drills are partially aimed at boosting the security of maritime trade in the region, according to Iranian state media. There are reports that long-range missiles, drones, and tanks will be employed throughout the course of the exercises, though details remain murky. Jamaran, the lead ship of Iran’s Moudge-class frigates, took part in the drills. A source of continued pride for Iran’s Navy and defense industry, Jamaran—which was commissioned in 2010—is Iran’s first locally built frigate. In keeping with the asymmetrical themes of the exercises, Russian attack helicopters will reportedly provide air support. Also represented on the Russian side is the Stoikiy corvette, the fourth entry in Russia’s new Steregushchiy-class line of corvettes. Of the Russian Navy’s twenty-four planned Steregushchiy-class corvettes, eight have been completed.

Rear Adm. Gholamreza Tahani, the deputy commander of the Iranian Navy, added that the exercises are open to participation from third parties. “The exercise we’re conducting with Russia is so flexible that not only one other country, but several others could join in later if they wish to do so,” Tahani said. The invitation was promptly taken up by China, which is now expected to participate in the drills. India, too, has requested to take part in the exercises.

These latest maneuvers, which are being called the “Marine Security Belt drills,” mark what has been a flurry of recent Iranian military activity, as Tehran seeks to pressure the Biden administration on the eve of negotiations with Washington to reestablish the Joint Comprehensive Plan of Action, better known as the 2015 Iran Deal. As Rear. Adm. Hossein Khanzadi, commander of the Iranian navy, put it, the drills mean “that global arrogance which until today dominated the region must realize that it needs to leave it.” Tehran seeks to use its deepening defense ties with Moscow and Beijing are a further source of leverage against the United States.

The full extent of Chinese and Indian participation in the ongoing drills remains unknown, with reports noting that India sent a “select group” of unspecified vessels. Their joint presence comes amid news that Beijing and New Delhi are slowly inching toward a possible resolution to the Sino-Indian military conflict over the contested Himalayan border.