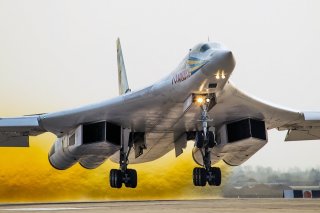 Would a stealth bomber armed with drones and hypersonic missiles be a contradiction in terms? Why would a plane designed not to be detected at all need a stand-off range weapon and forward-operating unmanned systems?  Many things come to mind, such as redundancy and speed, for example. Should a stealth bomber somehow be detected or simply wish to reduce risk by not flying over air defenses, a high-speed, long-range hypersonic missile certainly offers additional attack options. Perhaps a missile traveling at five times the speed of sound could overwhelm or destroy air defenses without being intercepted or even detected given its rate of approach. Even further, the combination of hypersonics and stealth might afford a paradigm-changing combination of proximity due to stealth and speed and lethality, presenting an unparalleled problem for adversaries.

These may be some of the reasons why Russia is advertising that its new PAK DA bomber will be armed with hypersonic weapons and supported by drones. A report in TASS says the new Russian stealth bomber is now being built for assembly by 2023, placing it just barely behind the fast-emerging B-21. The PAK DA design was approved several years ago, TASS said.

The U.S. may arm the B-21 with hypersonic missiles, however very little to nothing is reported about the new Air Force stealth bomber for obvious security reasons. It has been announced that the B-21 is expected to carry the nuclear-capable Long-Range Stand-Off Weapon, a cruise missile that provides stand-off range attack possibilities.

The mention of drone operations is also quite significant, as it seems apparent that Russia intends to copy the well-known U.S. effort to enable aircraft such as 5th-generation combat aircraft to control unmanned systems from the cockpit. Called the “loyal wingman” program by the U.S. Air Force, manned-unmanned teaming allowing direct control from an aircraft cockpit introduces substantial new options. Considerable progress has been made when it comes to decreasing latency and enabling more direct, or immediate command and control connectivity between an aircraft and surrounding drones. If done with a bomber, drones could test or assess air defenses and find targets at lower risk to the bombers themselves. Such a possibility also quite naturally enables forward weapons launch as well, depending upon the security and speed of any data link between the bomber and its support drones.

Will the new bomber rival the B-21? There certainly is not much actual information or detail with which to entertain the question, given that both are mysterious. Their respective mission scopes could be quite similar, yet available renderings of the Russian PAK DA look quite different than that of the B-21. The ends of the wings on the PAK DA go up in a 90-degree angle from the wing and its inlets are on the front of the fuselage and not blended into the top of the aircraft’s body.  Despite its apparent differences with the B-21 in terms of configuration, the Russian aircraft does look stealthy with a blended wing-body and embedded engine inlets.