Flying Alongside the Su-57, Russia’s Grom Wingman Drone Is a Killer 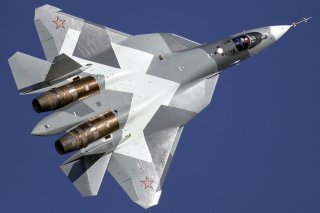 Here's What You Need to Remember: The Su-57 was also confirmed to pair with the S-70 Okhotnik-B, a stealth-capable multipurpose drone from the same family of Russian next-generation UAV’s as Grom. It is possible that Grom is being developed as an alternate loyal wingman choice for missions requiring swarm drone capability.