Russia is Building Its Own V-22 Osprey 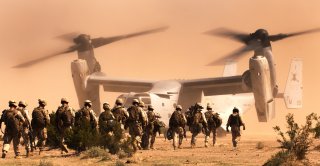 Russia is building a tilt-rotor transport aircraft that could be Moscow's equivalent of America's V-22 Osprey.

"Russian Airborne Forces are working on the possibility of using convertiplanes to deliver paratroopers on the battlefield," according to Sputnik News, citing an unnamed Russian defense industry source. "Before the end of September, it is planned to get the customer specification and start the experimental design work for this aircraft," the source said.

Sputnik News didn't provide any more details. But Russia has previously announced other tilt-rotor projects. In October 2017, arms maker Rostec said it would be building a prototype of Russia's first electric helicopter as a tilt-rotor aircraft. It will be based on the unmanned VRT30 tilt-rotor, or "convertiplane."

"The helicopter, which is expected to be ready in 2019, will have a takeoff weight of 1.5 tons and be completely electric," the company said. "The main aim of the company is to create a low noise, zero emissions machine that is efficient and reliable."

But a 1.5-ton aircraft wouldn't be much use for Russian paratroopers, except perhaps for reconnaissance, or transport of small cargoes. The U.S. V-22 Osprey, the prime example of a military tilt-rotor aircraft, weighs about 17 tons and carries 24 troops or 10 tons of cargo. Used primarily by the U.S. Marine Corps as a transport, the Osprey program has been long dogged by questions over the safety, reliability and survivability of the design.

So will Russia build an aircraft similar to the Osprey? Interestingly, Russian media specified that the tilt-rotor would be used by Russia's airborne forces. Russian  paratroopers embrace the air assault concept: the Mi-24 Hind helicopter is designated by Russia as an air assault helicopter, a heavily armed and armored "flying infantry fighting vehicle" that can carry eight paratroopers behind enemy lines, and then support them with a massive arsenal of cannon, rockets and missiles. Despite plans to turn the V-22 into a gunship, the Osprey could hardly be described as heavily armed or armored, and certainly not by Russian standards.

Russia's paratrooper force, the VDV, has traditionally spearheaded Moscow's foreign conflicts, including Afghanistan and Syria. A transport aircraft/helicopter that could land troops to seize an airhead, and then provide them with heavy fire support, would be invaluable.

On the other hand, the harsh laws of physics might make such a heavy design unfeasible. For now, Russia's tilt-rotor remains an unknown.