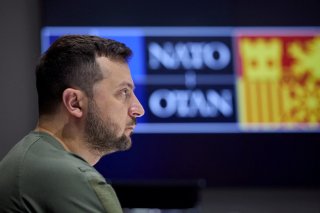 A top Kremlin official warned that Moscow is keeping a close eye on Ukraine’s renewed NATO bid in the aftermath of Russia’s annexation of the Donetsk, Luhansk, Kherson, and Zaporizhzhia regions.

“We are monitoring this decision very closely. And we remember that it was Ukraine’s NATO orientation and confirmation of Ukraine’s future membership in NATO that was one of the reasons for the special military operation,” Kremlin spokesman Dmitry Peskov told reporters on Monday, according to Russian state news outlet TASS. “There are countries there that support this option of accelerated accession, there are countries that do not. In any case, everyone refers to the consensus rule,” Peskov added, seemingly referencing the fact that Ukraine’s NATO membership requires assent from all thirty allies.

The Kremlin’s decision to proceed with plans to annex four occupied Ukrainian regions—Kherson, Zaporizhzhia, Donetsk, and Luhansk—in late September prompted an emergency appeal from Ukrainian president Volodymyr Zelenskyy for Kyiv’s “accelerated accession” to the alliance. NATO secretary general Jens Stoltenberg demurred on the issue of Ukraine’s membership prospects during an unscheduled press conference last week. “Our focus now is on providing immediate support to Ukraine, to help Ukraine defend itself against the Russian brutal invasion,” he said in response to a journalist’s question about Zelenskyy’s initiative. Stoltenberg reaffirmed that membership decisions can only be taken by consensus. Kyiv’s bid could face opposition from alliance members unwilling to enter into a legally binding commitment to defend Ukraine against Russia, as well as those—notably including the Biden administration—who maintain that the move is not the most effective way to aid the Ukrainian war effort. White House national security adviser Jake Sullivan told reporters the question of Ukraine’s NATO membership “should be taken up at a different time,” adding that “the best way for us to support Ukraine is through practical, on-the-ground support in Ukraine.”

Nine members of the alliance—Estonia, Czechia, Latvia, Lithuania, North Macedonia, Poland, Romania, Montenegro, and Slovakia—have since backed Kyiv’s NATO bid. “We support Ukraine in its defense against Russia’s invasion, demand (that Russia) immediately withdraw from all the occupied territories and encourage all allies to substantially increase their military aid to Ukraine,” the nine countries said in a joint statement, according to the AP. Experts have expressed concerns that Kyiv’s expedited membership could spark a wider European war at a time when Washington and NATO officials are focused on keeping the conflict contained within Ukraine’s borders. “There are escalatory risks in making Ukraine a member,” John Williams, a professor at Durham University, told Euronews. “NATO would [be] pitched more clearly into the war in a much more direct way,” he said.