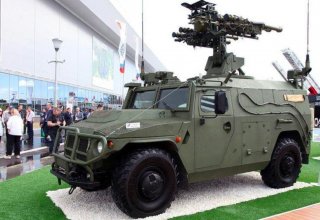 The Russian military appears to be moving quickly to match the U.S. Army’s success with Short-Range-Air-Defense (SHORAD). It's arming its own armored vehicles with ground-fired missiles designed to destroy planes, helicopters, drones, or even cruise missiles while on the move in combat.

Russia's TASS news agency reports that Russian “Humvee-like” Tigr-M armored vehicles will soon be armed with Gibka-S Very-Short-Range-Air Defense systems, according to the Commander of the Russian Armed Forces.

The Gibka-S weapons previously proved their effectiveness against aerial targets while moving at speeds up to thirty kilometers per hour in 2019, according to TASS.

The Russian move to fast-track its own SHORAD speaks to a pressing global threat circumstance related to the proliferation of available attack drone technology and the kinds of attacks they could conduct upon advancing armored forces. Low altitude drones, especially drone swarms, armed drones, or drones functioning themselves as explosives could present serious problems for fast-advancing ground troops. Most armored vehicles in the Russian Army are, much like the United States, most likely engineered for linear mechanized combat against an approaching ground force. SHORAD, therefore, seems to represent the importance of preparing for a multi-domain, air-ground-coordination kind of future warfare.  Interestingly, Russia’s VSHORAD effort is just now emerging and appears to be several years behind the U.S. SHORAD program which now deploys Stryker vehicles armed with HELLFIRE missiles to destroy enemy helicopters, drones, and fixed-wing assets.

Not much is known about the range, guidance system sophistication, or explosive components of the Gibka-S system of interceptor missiles, so it is not clear how they might compare to the Stinger, Hellfire, and Javelin missiles now arming U.S. Army Stryker vehicles. Clearly, the effort is an attempt to parallel or challenge the U.S. SHORAD program in a tactical or strategic way. Perhaps Russia realized that, much like the United States, it lacked the kind of mobile short-range air-defense capability needed for mechanized warfare.

The United States is already looking beyond SHORAD or exploring ways to expand the concept of operations more broadly across the fleet to possibly include other armored platforms in addition to Stryker. As part of this counter-air and counter-drone effort, the U.S. Army is exploring innovative kinds of Stryker-fired drone defenses enabled by a new generation of sensor, radar, targeting and fire control technology able to identify and attack approaching drones and even drone swarms.