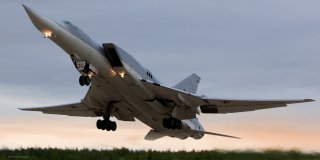 A pair of Russian bombers took part in a routine “scheduled flight” over the Black Sea on Tuesday. The flight lasted about five hours and was likely Moscow’s way of reminding NATO that it sees the waters as its own, despite declarations the sea is neutral.

The flight involved two Tupolev Tu-22M3 long-range bombers (NATO reporting name “Backfire”), the modernized version of the Cold War long-range bombers that were designed to strike ground and sea targets with supersonic missiles and bombs. The bombers have an operating range of seven thousand km and are capable of carrying nuclear weapons.

The Tu-22M3 model was developed in the early 1980s and officially entered service in 1989. It saw limited use at the end of the Soviet-Afghan War, and Russia currently maintains a force of more than one hundred of the Tu-22M bombers in all configurations.

“Two Tu-22M3 long-range bombers of Russia’s Aerospace Force performed a scheduled flight in the airspace over the neutral waters of the Black Sea,” the Russian Ministry of Defense said in a statement to TASS. “They were escorted by the crews of Su-27 fighters of the Southern Military District’s Air Force and Air Defense Army.”

Crews of Russia’s long-range aircraft regularly perform flights over the neutral waters of the Arctic, the Northern Atlantic, the Black and Baltic Seas, and the Pacific Ocean. The aircraft of Russia’s Aerospace Force perform all the flights in strict compliance with the international rules of using the airspace, the Defense Ministry has stressed.

Just as the Russian Aerospace Force’s Tu-95 strategic bombers have been compared to the U.S. Air Force’s B-52 Stratofortress bombers—dating from the early Cold War—the Tu-22 is in some ways analogous to the Air Force’s B-1 Lancer. However, while the B-1 has greater range and is a true intercontinental bomber, the Backfire is faster but is really a “theater” bomber in that it was designed to strike continental Europe and possibly some targets in the Atlantic.

The Russian bomber also has far less bomb load capacity. Yet, just as the United States military has sought to equip its aging bombers with twenty-first-century weapons, the Russian Air Force recently conducted testing of a new hypersonic aircraft missile for a modified version of the Tu-22M3M aircraft. According to Russian state media, the work on the new missile began several years ago and its testing was completed simultaneously with the work on the upgraded bomber.

“Recently, a new hypersonic missile was tested on the Tu-22M3,” a source in Russia’s military-industrial complex told TASS last month. “The missile will be part of the armament range of the upgraded Tu-22M3M along with a number of other latest aviation weapons.”

It isn’t clear if, or rather when those upgraded Tu-22M3M might also be flying high over the Black Sea. Russia will likely want to show off its latest improvements, and what could be better than a flight over neutral waters to get some time in the international spotlight.