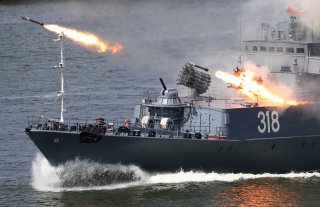 Boris Obnosov, the CEO of Tactical Missiles Corporation (KTRV), a major Russian weapons manufacturer, told the state-run TASS news outlet this week that the company is developing a new, high-speed anti-ship missile with an extended range. "Substantial attention is paid to developing new anti-submarine missiles—the latest APR-3ME version is already at the stage of its serial production. Moreover, the first batch of these missiles has already been delivered,” Obnosov said. “It will be eventually replaced by a small-size air-launched anti-submarine torpedo that will feature an increased operational range," he added.

The APR-3ME is the latest revision of the APR-3E, an airborne anti-submarine acoustic homing torpedo. A replacement for the earlier APR-2, the APR-3E can travel at speeds upwards of fifty-six knots and boasts an operational range of around three kilometers. The APR-3ME’s specifications have not been revealed.

"In particular, we are developing a next-generation high-speed anti-ship missile with an increased range and flight speed and also with the enhanced jam-resistant capability. Work is underway to upgrade the unique Paket-NK-E anti-torpedo/anti-submarine system. We are considering an option of mounting it on small-displacement warships," Obnosov said. Obnosov did not offer any additional details on these new projects. The delivery timelines and concrete performance specifications for these next-generation missiles remain unclear, and Russian sources have not yet confirmed the full range of platform compatibilities for these new weapons.

The new missiles will join Russia’s upcoming 3M22 Tsirkon winged, anti-ship hypersonic cruise missile to form the cutting-edge of Russian sea-launched weapons. According to defense industry insiders, the Tsirkon missile will be compatible with a wide range of advanced Russian submarines, corvettes, frigates, and older Kirov-class battlecruisers. The Tsirkon is reportedly capable of reaching speeds of up to Mach 9, or 6,900 miles per hour, and boasts an operational range of around 620 miles. The missile is believed by some U.S. and Russian military experts to pose a credible threat against U.S. and NATO carrier strike groups and carrier air wings.

The Tsirkon missile is nearing the end of its trials, according to top officials. "The state tests of the Tsirkon seaborne hypersonic cruise missile are nearing completion. From 2022, its serial deliveries will begin," Russian deputy defense minister Alexey Krivoruchko said earlier this month. Krivoruchko announced during the same event that the Russian military’s hardware modernization rate will reach 72.7 percent by the end of 2022.