Is Russia Forcing Anti-War Protesters Into the Military? 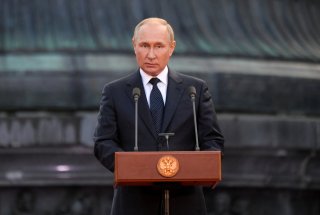 OVD-Info, an independent Russian human rights organization based in Moscow, reported on Thursday that several Russians arrested for protesting against President Vladimir Putin’s decision to draft reservists into the war in Ukraine had been forced to enlist in the Russian military. Kremlin spokesman Dmitry Peskov refused to confirm or deny the report at a press briefing later in the day.

OVD-Info, which the Russian government considers a “foreign agent” under its sweeping regulations concerning foreign “influence” in the country, noted that 1,328 Russians had been detained for protesting against the new measure, including 530 within the Moscow region. It claimed that seventeen protesters in the southwestern city of Voronezh were ordered to report to an enlistment office for military duty, and a demonstrator in Moscow was threatened with a ten-year prison term for refusing to do so, according to the group.

Russia’s independent SOTA news outlet—one of the last remaining independent news outlets in the country following the high-profile closures of the Dozhd television channel, the Ekho Moskvy radio station, and the Novaya Gazeta newspaper—also reported that detained protesters had been handed summons, even though many of them lacked military experience. Putin’s announcement on Wednesday morning stressed that the mobilization was intended to be “partial” and restricted to reservists, theoretically ensuring that all draftees had some military experience before entering combat in Ukraine. The Russian leader also indicated that currently enlisted soldiers would not be allowed to leave the military after their contracts expired, ensuring that the Russian military could maintain its current strength against Ukraine.

The two developments occurred roughly two weeks after Ukraine’s major victory over Russia in a series of battles east of the northern Ukrainian city of Kharkiv, in which Ukraine captured hundreds of square miles of territory, several hundred Russian prisoners, and a vast quantity of Russian armor, ammunition, and equipment.

The Kremlin sought to downplay the significance of the Ukrainian offensive, claiming that Russian soldiers had retreated from the areas around Kharkiv as part of a plan to redeploy to the contested Donbass region. In his speech, Putin emphasized that Russia continued to hold nearly all of the Donbass and announced that the two pro-Russian proto-states there—the Donetsk People’s Republic and Luhansk People’s Republic—would each hold an imminent referendum to secede from Ukraine and join Russia formally.

Kremlin spokesman Dmitry Peskov did not deny that anti-war protesters were being drafted, claiming at a press briefing that Moscow’s decision to draft them was “not against the law.”

Peskov did not comment on reports that his son had demanded an exemption from military service by noting his father’s role in Putin’s government during a prank call by two Russian dissidents pretending to be military recruiters the previous day.