Russia Furious as Ukraine Calls for Foreign Volunteers to Fight 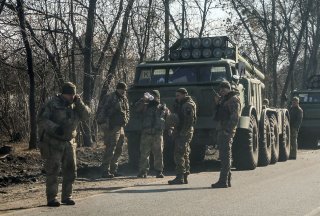 Ukrainian president Volodymyr Zelensky said on Thursday that 16,000 foreign volunteers had arrived in Ukraine to assist in its fight against the invading Russian military.

Ukraine publicly called for volunteers on February 28. Zelensky requested that “friends of peace and democracy” join a brigade of foreign volunteers, the “International Legion of Territorial Defense of Ukraine.”

“This is not just Russia’s invasion of Ukraine,” Zelensky said in a statement. “This is the beginning of a war against Europe, against European structures, against democracy, against basic human rights, against a global order of law, rules and peaceful coexistence.”

Ukraine’s recruitment of volunteers from other countries has drawn parallels with the “International Brigades” who fought in the Spanish Civil War in the 1930s against fascist forces led by General Francisco Franco. Franco’s forces were ultimately successful, and Franco ruled Spain as its dictator from 1939 until his death in 1975.

In its international recruitment drive, the Ukrainian government has emphasized the need for, and high priority in recruiting, foreign nationals with prior military experience.

“I wish to make an official statement that none of the mercenaries the West is sending to Ukraine to fight for the nationalist regime in Kiev can be considered as combatants in accordance with international humanitarian law or enjoy the status of prisoners of war," Konashenkov said.

Konashenkov said that foreign fighters captured in Ukraine would be subjected to criminal penalties “at best.”

"We are urging all foreign citizens who may have plans to go and fight for Kiev’s nationalist regime to think a dozen times before getting on the way," he said.

In previous statements, Russian leader Vladimir Putin accused the Ukrainian government of relying on private volunteer groups, including those with far-right political affiliations.

In the aftermath of Russia’s annexation of Crimea and the emergence of pro-Russian separatist rebel groups in eastern Ukraine in 2014, the Ukrainian army recruited private militias – including those with neo-Nazi ties – to help defend it. Several of these groups, including the notorious “Azov Battalion,” remain active in the ongoing conflict, although their role relative to the army as a whole has sharply decreased.