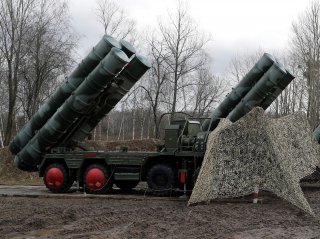 The Kremlin has abruptly suspended further S-400 deliveries to The People’s Republic of China (PRC), portending an early sign of strain in the burgeoning ‘strategic partnership’ between Russia and China.

As Russia’s premier missile defense system, the S-400 Triumf has generated widespread interest from high-profile importers over the past decade. In a substantial boon to Russia’s arms export industry, China became the first foreign buyer to give the Triumf a stamp of import approval as part of a $3 billion deal for the delivery of six S-400 battalions—a total of thirty-six launchers. It was widely reported that the PRC received its first S-400 shipment in May 2018, but subsequent coverage by Russian and Chinese defense sources suggests that a handful of necessary components are still in the process of being delivered to the PRC. Moreover, reportedly Russia must also provide some onsite training and installation work before China’s S-400 systems can be fully deployed.

Late last week, several Chinese news sources reported that the Kremlin has indefinitely postponed all S-400 related deliveries to PRC’s armed forces. The most complete explanation comes from Chinese outlet Sohu, and is worth quoting in full: “This time, Russia announced the postponement of the delivery of missiles for the Chinese S-400 system. To a certain extent, we can say that it is for the sake of China. Getting a gun is not as easy as signing an invoice after receiving a weapon. They say that the work on delivering these weapons is quite complicated. While China has to send personnel for training, Russia also needs to send a lot of technical personnel to put the weapons into service...the reasons given by Russia are very heartwarming. It turns out that Russia is worried that the delivery of S-400 missiles at this time will affect the anti-pandemic actions of the Chinese army and does not want to cause trouble to China.”

Sohu’s remarkable article raises more questions than it answers. It should be stressed that, as of the time of writing, neither Moscow nor Beijing have issued official statements pertaining to the suspension of S-400 deliveries. Sohu did not name the source behind this alleged Russian announcement, nor did they explicitly state that they are relying on an anonymous source if that is indeed the case. Leaving these reservations aside, the idea that Russia unilaterally suspended S-400 deliveries to China as a show of solidarity with Beijing’s anti-pandemic efforts is deeply implausible on several fronts. It is not at all clear how the delivery and installation of S-400 components will facilitate the spread of the coronavirus in China—testing every servicemen involved in these transfers is a logistical non-issue for both the Chinese and Russian militaries. It is even less plausible that the Russian side would take the initiative in raising this alleged “problem,” and that they would opt for an indefinite suspension instead of working with the PRC to reschedule the shipments for a later date.

Indian media, which has actively circulated this story over the past week, offers an altogether more compelling alternative explanation: the Kremlin, seeking to preserve is fruitful military and arms trade ties with both Beijing and New Delhi, does not want to be dragged into the ongoing India-China conflict over the Himalayan border. For instance, if PRC forces were to deploy their newly acquired S-400 systems against Indian assets, it could potentially rupture Russo-Indian relations and undermine Russian President Vladimir Putin’s carefully cultivated image as an authoritative mediator in international politics.

The ongoing uncertainty over the status of China’s S-400 contract underscores a latent tension between the Kremlin’s commitment to deepening military cooperation with China on the one hand, and Russia’s broader geopolitical standing in the Asia-Pacific region on the other.