Russia Has The Advantage Over America In Robotic Ground Combat Vehicles 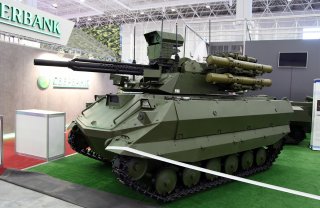 Here's What You Need To Remember: Both Russia and the United States are entering the 2020s with ambitious plans to field a diverse fleet of robotic armored vehicles. Whether these systems can overcome the command-and-control issues particular to ground-based drones that bedeviled the Uran-9, and how they will be integrated alongside traditional manned fighting vehicles, remains to be seen.

Russia may have been slower to adopt armed aerial drones (UCAVs) into service but it moved ahead of America in the domain-land warfare when it deployed the Uran-9—effectively, a heavily-armed remote-control infantry fighting vehicle—into combat in Syria.

But the Uran-9’s combat test exhibited disappointing results due to flaws in its communication links. It’s simply much harder to maintain control links with a ground-based drone than a flying vehicle due to intervening terrain and buildings, especially in an urban environment. Coupled with the intense signals activity and limited available bandwidth typical to a combat zone, the Uran-9’s control link was frequently disrupted and could not be maintained beyond a few hundred meters.

But that experience hasn’t dissuaded the Russian military from pressing ahead by picking up in December 2019 two ambitious industry-led projects for Unmanned Ground Combat Vehicles (UGCV) according to an article in Rossiya Segodnya.

The first project, by Uralvagonzavod is the Shturm (“Storm”) based on the familiar hull of the T-72B3 main battle tank.  While Russian press earlier touted the possibility of automating its new T-14 Armata tanks, the availability and low cost of the T-72 likely made it a more sensible candidate to spearhead Russia’s tank fleet into a new era of robot warfare.

Unlike the fully remote-control Uran-9, the Shturm is intended to incorporate greater degrees automation as explained in an article by Tamir Eshel of Defense Update: according to analysts, it is likely that the robotic vehicles will have autonomous functions for movement and maneuverability (considered low-level autonomy). Higher-level autonomous functions could include obstacle avoidance using movement planning and tools (the dozer blade, for example)…The robotic tanks will also be equipped with means for navigation, and self-orientation to interpret blue-force tracking (BFT) situational pictures to report their status and positions and avoid fratricide. Other functions are likely to be controlled by manned operators.

A unit of four Shturm would be controlled via a command vehicle also using the hull of a T-72, remodeled to accommodate two crew members and six controllers.

Shturm would come in four variants, all of which come equipped with an active-protection system to defend against rockets and missiles, a defensive 7.62-millimeter machine gun, and a dozer blade to plow through terrain obstacles. The tank would engage its Active Protection System and machinegun automatically in self-defense. As such systems are already heavily automated even on manned tanks, this makes plenty of sense. However, in most cases, the implication appears to be that human input would be required for offensive use of weaponry.

The most attention-grabbing Shturm variant may be a 50-ton main battle tank oriented for urban warfare with an autoloading 125-millimeter gun shortened to allow easier maneuverability in city streets. It would come with 22 rounds and the ability to elevate 15–20 degrees to engage enemies perched in urban high-rises.

A proposed “Terminator” anti-personnel variant would be armed with dual 30-millimeter auto-cannons that can elevate even higher, backed up by RPO Shmel flame-throwing thermobaric rockets.

Two other models would be armed purely with Shmel rockets, or with even more destructive 220-millimeter thermobaric rockets used on the infamous TOS-1 Buratino artillery vehicle.

These armament packages reflect less an interest in dueling enemy tanks on open plains than with waging urban warfare in claustrophobic city streets—an environment in which tanks are both highly vulnerable yet also highly in demand.  Russia suffered extremely heavy tank losses in the city of Grozny during the first Chechen War, and is likely also preoccupied with heavy Syrian armor losses in huge urban battles.

So drone tanks might be appealing in scenarios where heavy firepower is needed—and heavy losses are expected.  Given the slower pace of fighting one city block at a time, the need to keep the robot tanks within range of their command vehicle might also be mitigated.

The second project is the BAS-01G Soratnik (“Companion”), a tracked fire support vehicle intended to serve alongside infantry formations.

The low-profile 7.7-ton vehicle is a product of Kalashnikov, the company famous for producing the AK-47 assault rifle.  In addition to fire support, Soratnik is described as having application in reconnaissance, guard/patrol duties, and mine or obstacle clearance.

The little armored vehicle is basically a firing platform with a gyro-stabilized MBDU remote control weapon station that can be fitted with various direct-fire infantry support weapons ranging on the low end from 7.62-millimeter PKT and 12.7-millimeter Kord machine guns, to 30- and 40-millimeter automatic grenade launchers.  Furthermore, the vehicle is packaged with sensors that can acquire targets and calculate firing solutions.

The Soratnik can also be refitted in a tank destroyer role with a loadout of eight deadly Kornet-EM laser-guided anti-tank missiles with tandem shaped-charge warheads and a theoretical maximum range of five miles.

A video released by Kalashnikov shows Soratnik being employed as a moving source of cover for infantry, emphasizing it’s likely armored versus at least rifle-caliber bullets.  Though Soratnik reportedly has a range of 240 miles, its role as an infantry support platform might help keep it closer to its operator station, potentially lessening the command-link problems which often disrupted the Uran-9 in Syria.

Soratnik is reportedly designed to work in conjunction with light drones, which theoretically could be used to acquire targets and even lase vehicles for engagement using Kornet missiles.

Still, there remains a lot of work to be done to ensure the reliability of control links, and devise doctrine on how to use robot tanks alongside regular infantry and armor.  As an article by Kelsey Atherton on C4ISRNET emphasizes, the Russian military’s next priority may be figuring out a concept of operation on how to use the robot tanks it just bought into.

Moscow’s commitment to the two new UGVs was followed in January 2020 by an announcement by the U.S. Army awarding contracts to develop light- and medium-weight unmanned fighting vehicles. Eventually, a heavyweight main battle-tank substitute is also set for development, but a contract has yet to be awarded.

Thus, both Russia and the United States are entering the 2020s with ambitious plans to field a diverse fleet of robotic armored vehicles. Whether these systems can overcome the command-and-control issues particular to ground-based drones that bedeviled the Uran-9, and how they will be integrated alongside traditional manned fighting vehicles, remains to be seen.