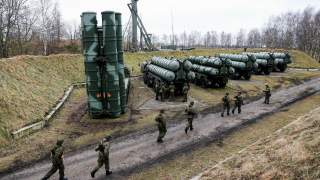 China reportedly has received its second set of S-400 surface-to-air missile systems from Russia, marking a potentially major improvement of the country’s air-defenses.

During wartime, Chinese S-400s, in theory, could shoot down Taiwanese fighters while they’re taking off. That danger has compelled Taiwan to develop missiles that can strike the S-400 batteries.

China received its first S-400 regimental set back in 2018 as part of a $3-billion deal. Each regiment includes four battalions, each with eight four-cell launchers. Russia, Belarus, India and Turkey also are acquiring the type. Russia has deployed the S-400 to Syria as well as to Russia’s Baltic exclave Kaliningrad.

The S-400, a development of the earlier S-300, can hit targets more than 150 miles away, if the reported result of the type's first-ever test in Chinese service is accurate.

The Taiwan strait is just 140 miles across at its widest point, meaning that, in theory, Chinese S-400s could target Taiwanese warplanes shortly after they take off.

But the short distance separating China and Taiwan works both ways. At the same time that China is fielding S-400s and other long-range surface-to-air missiles, Taiwan is deploying air- and surface-launched munitions that can target the Chinese missile launchers.

According to The Diplomat, a Chinese S-400 intercepted a "simulated ballistic target" around 250 kilometers, or 155 miles, away. The Taiwan Strait separating Taiwan from the Chinese mainland varies between 81 and 140 miles wide.

Annexing Taiwan is the primary military ambition of the Chinese Communist Party. Chinese war plans apparently anticipate a massive air and missile bombardment of Taiwanese defenses followed by an amphibious assault across the strait under heavy fighter cover.

To defend against attack, the Taiwanese air force operates around 330 F-CK, F-16 and Mirage 2000 fighters, a not insignificant force. Taipei is upgrading its F-16s and F-CKs  with new sensors and weapons. But at first glance, China possesses the aerial advantage in a cross-strait battle.

"Taiwan faces one of the most difficult air-defense problems in the world," the California think-tank RAND reported in 2016. "What makes Taiwan’s air-defense problem so difficult is the combination of its proximity to China, coupled with the massive investments that the People’s Republic of China has made in a range of systems that threaten Taiwan’s aircraft—not just while they are in the air but also while they are on the ground."

Assuming Taiwanese fighters survive the first round of Chinese attacks, either by dispersing to highways or caves or through some heroic defensive effort by Taiwan's own surface-to-air missile batteries, the planes still must contend with Chinese SAMs, now including S-400s, firing missiles across the strait.

"On the slight chance that an aircraft could get off the ground, it is likely to face attack before it can reach altitude or combat speeds," RAND concluded.

RAND’s assessment however assumes the S-400 and other Russian long-range air-defenses work as advertised. The Swedish Defense Research Agency in 2019 warned against assuming Russian missiles always work perfectly. The Swedes cited the poor performance of Russian-made systems in Syrian service.

"The fact that Russian-supplied [air-defense] systems operated by Syrians, including very modern systems such as Pantsir, have repeatedly come up short in Syria does not mean that some of the new capabilities that Russia is deploying at home are not real or not a source for concern,” the Swedish report explained.

"But the track record of actual operations should still give pause for thought; the laws of physics still apply, the Earth is still round and hitting a moving target over long distances is still both complicated and demanding."

Taipei isn’t taking any chances. Just in case the S-400s indeed are as capable as some experts fear they are, Taiwan has invested heavily in missiles that are capable of suppressing Chinese SAM sites. The Taiwanese arsenal includes hundreds of ground-launched ballistic missiles with sufficient range to strike Chinese S-400s.

Taiwan's fighters are getting ground-attack cruise missiles. In 2014, the Taiwanese air force finished modifying 71 F-CK fighters to carry new Wan Chien stand-off air-to-surface missiles. The air force planned to modify the other 56 F-CKs to a similar standard by 2017.

The Wan Chien missile system bolsters the fighter fleet by "increase[ing] combat effectiveness and [providing] the capability to strike airports, harbors and missile and radar positions," according to Jane's.

But RAND advised Taiwan's leaders to try winning the fighter battle ... by not fighting it, and investing in surface-to-air missiles instead of warplanes. China's S-400s would have nothing to shoot at, while Taiwan's own SAM batteries plucked Chinese fighters from the sky.