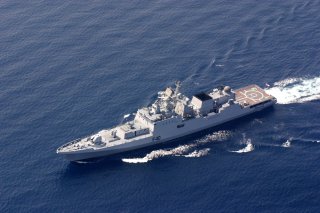 This month the Chinese aircraft carrier Liaoning sailed past Taiwan in a show of Chinese naval strength in the region, but on the other side of the world there was recently another potentially worrisome show of force in the North Sea and English Channel. Seven Russian naval vessels had "lingered" in the English Channel for several days while en route to Syria.

The Royal Navy reported that nine of its vessels completed a "concentrated operation" that included shadowing the Russian warships. The development came as RN specialists and planners, as well as other UK armed services were assisting the National Health Service (NHS) and government departments in addressing the COVID-19 pandemic outbreak in the UK.

Among the Royal Navy warships that took part in the operation were the Type 23 frigates HMS Kent, HMS Sutherland, HMS Argyll and HMS Richmond, which were joined by Offshore Patrol Vessels HMS Tyne and HMS Mersey along with multi-role hydrographic survey HMS Echo. These were joined by the British Royal Fleet Auxiliary vessels RFA Tideforce, RFA Tidespring along with support from NATO allies.

“As the Armed Forces are helping the NHS save lives in the UK, it's essential the Navy continues to deliver the tasks we have always performed to help keep Britain safe," said Lieutenant Nick Ward, HMS Tyne executive officer. "This is very much part of routine business for HMS Tyne and represents one of the many roles our patrol vessels perform in support of the Royal Navy's commitments. This is our core business and represents an enduring commitment to uphold the security of the UK.”

The Royal Navy's warships tracked the Russian convoy in the North Sea and English Channel, and were supported by Merlin and Wildcat helicopters of 814 and 815 Naval Air Squadrons, which flew over the Russian vessels. HMS Tyne was involved for more than a week monitoring the Russian's movements in the waterways.

Royal Navy sailors and aircrew monitored the movements of the Russian ships using state-of-the-art radar, surveillance cameras and other sensors. This allowed the Royal Navy to track the course and speed of the Russian vessels as they passed the British Isles.

The Guardian newspaper reported that the Russian naval activity came shortly after Russian planes were also shadowed by RAF jets west of the British Isles on at least two occasions in recent months. RAF Typhoons were scrambled earlier in March to intercept two Russian Tu-142 "Bear" bombers north of the Shetland Islands and they followed them as they flew south and west into airspace used by transatlantic commercial airliners.

Military sources have said the Russian movements were a reaction to Operation Cold Response, a major multinational military exercise that involved 14,000 troops from nine countries that were due to be conducted in Norway in mid-March to test the response to western forces in extreme cold weather conditions. However, it was canceled due to the coronavirus outbreak to reduce the unnecessary spread of the disease among the soldiers.

The Royal Navy has previously "shadowed" Russian vessels in the English Channel in recent years. In October 2016, two British naval ships tracked the movement of Russian warships that were en route to Syria. At the time the UK's Ministry of Defense announced the Russian warships would be "man-marked every step of the way" while near UK water.

Peter Suciu is a Michigan-based writer who has contributed to more than four dozen magazines, newspapers and websites. He is the author of several books on military headgear, including A Gallery of Military Headdress, which is available on Amazon.com.