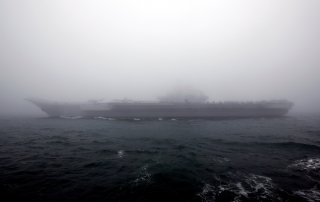 Over the past weekend, the Chinese aircraft carrier Liaoning, which is one of the People's Liberation Army Navy's two aircraft carriers, sailed past Taiwan in a show of Chinese naval strength in the region as the American aircraft carrier USS Theodore Roosevelt (CVN-71) remains in port in Guam as its crew continues to address a breakout of coronavirus. As of Sunday, 585 sailors have tested positive for COVID-19 and nearly 4,000 sailors have been moved ashore in Guam, while 800 remain aboard to maintain the ship's critical systems and sanitize the carrier.

Last week two sailors on the USS Ronald Reagan (CVN-76) also tested positive for COVID-19 while she remains at her homeport in Yokosuak, Japan for routine maintenance. The crew is undergoing 14 days of isolation.

As a result of the two American carriers being sidelined, the Liaoning is currently the only carrier operating in the Western Pacific. According to South China Morning Post, the aircraft carrier was accompanied by the Xining and Guiyang, two Type 052D guided-missile destroyers; the Zaozhuang and Rizhao, two Type 054A guide-missile frigates; and the Type 901 combat support ship Hulunhu when it was spotted by Japanese authorities in the Miyako Strait due east of the most northernmost tip of Taiwan on Saturday evening.

Taiwan scrambled warships to monitor the movements of the carrier strike group.

"We have conducted reconnaissance and monitoring over the sea and air space around Taiwan," said Taiwan ministry spokesman Shih Shun-wen.

This is just the latest flare-up between China and Taiwan.

China has laid vast territorial claims off its coast and also considers Taiwan to be a breakaway province. With the U.S. carriers sidelined by COVID-19 this is a way for China to flex its muscles and is the first time it has had carrier dominance in the region. But this also allowed China to illustrate its successful response to coronavirus as the U.S. Navy continues to address the outbreak on two of its most powerful warships.

That fact was highlighted in an op-ed for Global Times, in which Hu Bo, director of Peking University Center for Maritime Studies wrote: "As the most powerful military force in the world, with the highest level of combat readiness, the US military's failure to contain the virus has been disappointing. There is a number of reasons for this, such as a large number of personnel deployed overseas, poor military-political relations, and absence preparedness. The crux of the problem, however, lies in the fact that the US military is facing a dilemma that is impossible to deal with. The US military and intelligence system realized early on the severity of the epidemic and took control measures, while repeatedly warning the White House and the Pentagon."

The United States is not without any presence in the region, however. On Saturday evening the USS Barry (DDG-52), and Arleigh-Burke-class guided-missile destroyer, also sailed through the Taiwan Strait.