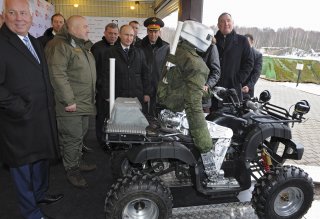 Throughout much of military history, improved defenses meant that improved weapons needed to be created. Now in the modern era, advanced weapons are also countered. The advent of aircraft required anti-aircraft weapons, and now with the threat of drones and drone swarms, there are efforts underway to counter those threats, too.

Russia’s “Marker” robotic platform, which was recently tested at the Vostochny launch site, is one of the systems that Moscow is employing to combat drones and other autonomous weapon threats. Resembling a miniature tank, the Marker is being used as a springboard for the development of other robotic technologies. It will be able to combat intruding unmanned aerial vehicles (UAVs) by utilizing electronic pulses, small so-called “suicide drones” and even by overtaking and capturing the computer network that controls the autonomous weapons.

According to the press service of Android Technics, the maker of the Marker robot, the platform will be able to identify multiple types of intruders including unauthorized individuals, motor vehicles and drones. Various countermeasures can and will be applied, depending on the intruder type.

“Options of radio electronic jamming of the drone control system, capturing networks and suicide drones to neutralize the intruding UAV are considered in case of drone combating,” the press service told the Tass news agency on Sunday.

If the Marker robot locates an intruding individual, then it will use an audio system and communicate an unauthorized access message to the rapid response team, according to the report.

“The process of combating intruders using a motor vehicle is approximately the same but in this situation the Market can also follow and intercept the intruder,” Tass added.

The Marker has been under development as part of an effort from the Russian Foundation for Advanced Research Projects’ National Center for Development of Technologies and Basic Elements of Robotic and the Android Technics’ Scientific Production Association, which seeks to use the platform to test future generations of combat robots. The Foundation for Advanced Research is considered Russia’s counterpart to the U.S. military’s DARPA.

“The Marker is a robotized platform used for testing the most advanced technologies for second-generation combat robots, which currently only undergo the concept development phase,” Foundation CEO Andrei Grigoriyev told reporters earlier this year. “Marker is also a concept, developed specifically for testing of the third, fourth and fifth-generation technologies. However, the specific machines will be eventually developed by the Ministry of Defense.”

The Marker is expected to become the foundation for testing the interaction between ground robots, unmanned aerial vehicles and special operations forces. It is positioned as a constructor kit for the development of future warfare models.

The platform had successfully passed autonomous trails in Russia’s wintry conditions earlier this year. In fact, the platform is able to adhere to the rules of war while protecting civilians, and is capable of selective firing, distinguishing between civilians and enemy soldiers, according to The Defense Post.