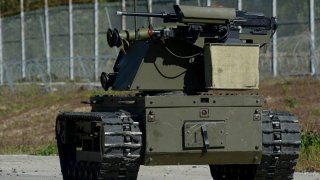 Russian efforts to build so-called "kamikaze drones" – unmanned aerial vehicles (UAVs) that are essentially flying artillery shells – have been widely reported on, but now it appears that the UAVs could be used as part of the armament on a still-in-development robotic delivery/weapons system.

The Russian robotic combat platform Marker, which has been in development since 2018, could be armed with a number of these sophisticated UAVs, Vitaly Davydov, deputy director-general of Russia's Foundation for Advance Research, told reporters this week.

The Marker is an experimental platform that was first conceived by the Russian Scientific and Technology Association, Android Technology. It is a robotic system that is capable of guiding unmanned machines on the battlefield. Once deployed, the Marker could solve various combat tasks and in essence, operate at least semi-autonomously of human control. It was designed to operate as a group of five robots with just one operator to turn on and refuel the systems.

The Marker platform was first publicly presented in October of last year at the Magnitogorsk test range for robotic systems and it is scheduled to enter service with the Russian military by 2025.

Davydov explained that the Marker could be equipped with a number of UAVs, which could be used to provide both reconnaissance and the "destruction of enemy targets." The drones would be "obliterated" upon the impact of objects – thus implying that these would operate as a "kamikaze" weapon. Experts have suggested that such kamikaze drones could be necessary to fight terrorists but also as a way to overcome an enemy's air defense system.

Russia is not alone in developing such a drone platform, and currently, similar programs are underway in the United States, China, Iran, Turkey, the United Kingdom, Poland, and Ukraine.

The drones would not be the only armament on the Russian Marker system. It would also be equipped with a rocket launcher and machine gun.

Davydov explained that the Russian Defence Ministry is closely monitoring the implementation of the project, which could see service with the Russian Emergencies Ministry and the Federal Security Service (FSB).

The Marker is also not Russia's only autonomous weapons platform. The Russian Armed Forces had received the first batch of its Uran-9 combat multifunctional robotics systems, which were tested in combat conditions in Syria with mixed results. The Uran-9 was equipped with Attaka anti-tank guided missiles, 2A72 30mm automatic cannon and a 7.62mm PKT machine gun.

The battlefield of the future could see similar platforms deployed.

Last week the Chinese Sharp Claw I UGV entered service with the People's Liberation Army Ground Forces (PLAGF). It is a tracked, combat and reconnaissance unmanned ground vehicle (UGV) that was first unveiled at the Airshow China 2014. According to its developers, it can also operate autonomously and is equipped with a 7.62mm light machine gun.