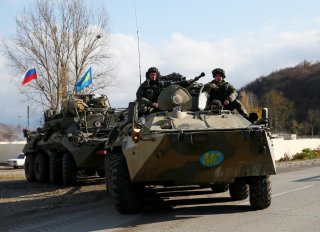 The Russian government announced on Tuesday that it had successfully mediated a ceasefire between Armenia and Azerbaijan following an outbreak of violence along their shared border—the first large-scale violence between the two countries since the end of their six-week war in late 2020.

“We hope that the agreement reached as a result of Russian mediation on a ceasefire from 9am (local time) on September 13 will be fully implemented,” the Russian foreign ministry claimed in a statement, emphasizing that the ongoing territorial dispute between the two countries needed to be resolved “exclusively through political and diplomatic means” rather than violence.

“We call on the parties to avoid further escalation of the situation, exercise restraint and fully respect the ceasefire, in line with the tripartite communiques of the leaders of Russia, Azerbaijan and Armenia of November 9, 2020 and January 11 and November 26, 2021,” the statement read.

The foreign ministry indicated that it had approached the two sides for mediation after a formal request for assistance from Armenia, a member of the Russian-dominated Collective Security Treaty Organization (CSTO) military alliance. Its statement added that the Kremlin remained “in close contact” with both Baku and Yerevan and that it continued to insist on a resolution to the crisis “within the framework of the work of the bilateral commission on the delimitation of the Armenian-Azerbaijani border, with assistance at the level of recommendations from Russia.”

Armenia and Azerbaijan have long disputed the Nagorno-Karabakh region, which lies roughly between them and is predominantly Armenian but has historically belonged to Azerbaijan. Much of the region is controlled by Artsakh, an unrecognized state closely aligned with Armenia that has remained independent from Azerbaijan since the late 1980s. However, much of Artsakh’s territory was recaptured by Azerbaijan following the six-week war between Armenia and Azerbaijan in late 2020, in which Baku was commended for its strategic and effective use of drones and other light aircraft. That war ended following Russian mediation in November 2020 and the resulting settlement provided for the deployment of Russian peacekeepers in several border areas to prevent a resumption of hostilities.

The clashes over the past forty-eight hours have resulted in roughly fifty Armenian deaths, according to Armenian prime minister Nikol Pashinian. The government of Azerbaijan also acknowledged this week that it had lost fifty soldiers during the fighting.