Who Is to Blame For The Armenian-Azerbaijani War In Nagorno-Karabakh? 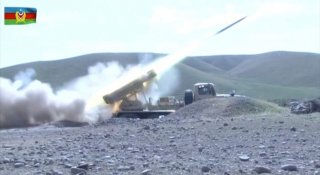 The dramatic outbreak of violence along the border between Armenian-controlled Karabakh and Azerbaijan has one again thrust the conflict back into the public spotlight.

While recurring violence along the border is all too common—most recently flaring up in July, the scale of the recent escalation is by far the largest since a cease-fire brought an end to the Nagorno-Karabakh War in 1994.

In the past two days, the Armenian side has reported 103 soldiers as well as seven civilian deaths that resulted from the shelling of civilian settlements, including the capital of Stepanakert.

The Azerbaijani government has not disclosed military casualties—estimates place the number around 920, instead of focusing on the reported deaths of twelve civilians. The violence has already lasted for three days and shows little sign of stopping as it enters the fourth.

Both Armenia and Azerbaijan have accused each other of being responsible for starting the violence, and the international media has largely taken struck a neutral tone.

Almost universally, headlines from major news sources have used language that describes the violence without attributing it to any particular source. The New York Times declared that “Fighting Flares Between Azerbaijan and Armenia;” The Washington Post reported that “Armenia, Azerbaijan clash in separatist region for a 2nd day;” and the BBC simply stated that “Armenia and Azerbaijan fight over disputed Nagorno-Karabakh.” The same language that calls on both sides to cease fighting has been taken up by political leaders.

The U.S. State Department “[urged] both sides to cease hostilities immediately.” Charles Michel, the president of the European Council, tweeted that “an immediate return to negotiations, without preconditions, is the only way forward.” The OSCE Minsk Group, the organization responsible for mediating the Nagorno-Karabakh conflict, issued a statement “[appealing] to the sides to cease hostilities immediately.”

On the surface, these calls for both sides to cease hostilities and commit to negotiations seem reasonable. The history of Karabakh is complicated, with both sides claiming a legitimate right to the land. Armenians point to the region’s long history of being populated mostly by Armenians and the 1988 and 1991 referendums in which the majority-Armenian population “voted overwhelmingly for independence.”

Azerbaijanis rely on the fact that the territory is still internationally recognized as part of Azerbaijan, the legacy of a 1921 decision made by the Soviet Union to transfer Karabakh to Azerbaijan as part of a divide-and-rule strategy. Furthermore, the lack of independent sources of information on the ground means that the international community has to rely on reporting from Armenia and Azerbaijan themselves rather than independently confirming the various claims. This has been particularly fraught given Azerbaijan’s poor history of media freedom and its refusal to allow foreign journalists into the country during the current escalation. With these limitations, it is not difficult to understand why media sources and political leaders are hesitant to assign blame and instead choose to condemn the violence itself.

However, this kind of equivocation between Armenia and Azerbaijan is not borne out by an analysis of the facts at hand. It is true that no external source has definitively identified the cause of the recent outburst of violence, but all signs point to Azerbaijan. Leaving aside the fact that it would be a poor strategic move for Armenia, a country of roughly 3 million, to instigate a war with Azerbaijan, an oil-rich country of almost 10 million that spends six-times more on its military, Armenia has little to gain from renewed hostilities. As Thomas de Waal, perhaps the world’s leading expert on Nagorno-Karabakh, told Ahval in an interview on Sunday, “the Armenians won the war of the 1990s. They have all the territory they want…the Armenians don’t have an incentive in starting fighting.” On the other hand, de Waal points out, “the side that has an interest in military activities is the Azerbaijani side…for various reasons Azerbaijan calculates that military action will win it something.”

De Waal’s analysis is further supported by the fact that Armenia and Karabakh have both stated their support for monitoring efforts such as the deployment of gunfire locator systems and additional OSCE observers to help determine the source of any attack. Azerbaijan, however, has refused to do so, as the lack of oversight “provides useful cover for Azerbaijan’s belligerence.” Even before turning to the specific events of recent weeks, there is much more reason to believe that Azerbaijan would be responsible for an escalation of the conflict.

However, there are also specific events that point to Azerbaijan being responsible for the current violence. In July and August, Azerbaijan and Turkey held large-scale military exercises involving a reported 11,000 Turkish troops. Speaking about the exercises on September 19, a week before the current violence began, Azerbaijani President Ilham Aliyev told the media that the exercises “coincided with the Tovuz incident. Armenia should think about whether it was coincidence or not. These drills once again demonstrate [Turkish-Azerbaijani] unity. There are only 80 kilometers (49 miles) between the Azerbaijan-Armenia border in Nakhchivan and Yerevan. Armenia knows it, and this intimidates them.”

The joint-exercises also underscored the increasing support Turkey has been offering Azerbaijan. As de Waal reported in his interview, analysis of the current situation must take into account “the new factor that Erdogan’s Turkey is openly supporting an Azerbaijani military campaign.” Indeed, following the outbreak of widespread violence, Erdogan offered support to Azerbaijan, saying the Azerbaijani government “had to take matters into its own hands whether it likes it or not,” and that “Turkey will continue to stand with...Azerbaijan with all its resources and heart.”

Turkey’s support has extended beyond rhetoric and training exercises. Indeed, on Tuesday, the Armenian government reported that a Turkish F-16 had shot down an Armenian SU-25 over Armenian airspace, a move with potentially severe regional repercussions if it is confirmed. Furthermore, even before the outbreak of fighting, there had been reports that Turkey was paying Syrian mercenaries to deploy to Azerbaijan, a practice that Turkey had already employed in Libya. While reports of Syrian mercenaries were initially unconfirmed, substantial evidence has come out in recent days. The Guardian and Reuters both spoke with men who said that Turkey was paying them to travel to Azerbaijan to support the military since at least last month.

Elizabeth Tsurkov, a fellow at the Center for Global Policy, reported on Twitter that “dozens of fighters from NW Syria (outside of regime control) left Syria via Turkey in an unknown direction about a week ago.” She continued, “About a month ago, rumors spread on WhatsApp among SNA [Syrian National Army] fighters that they can register to go to Azerbaijan.” Lindsey Snell, a journalist who was previously jailed by Turkish authorities, released a photo that alleges to show men from the Hamza Division arriving in Baku via Ankara. Syrian researcher and journalist Hussein Akoush reported that two of these Syrian mercenaries have been confirmed to have died fighting in Azerbaijan. The confirmation that Azerbaijan had been importing Syrian mercenaries before the recent outbreak of fighting flies in the face of Azerbaijan’s attempt to blame Armenia for the violence. Similarly, the presence of Turkish TV crews on the frontlines the same morning that violence began also suggests that Turkish and Azerbaijani officials were preparing for war before the fighting started.

While it may be tempting for the media to take an “evenhanded” approach to reporting on the conflict between Armenia and Azerbaijan, there is no equivalence in reality. The facts on the ground strongly suggest that Azerbaijan is responsible for the drastic escalation in violence. Not only does Armenia have nothing to gain from the renewed violence—in contrast to Azerbaijan which would very much like to rewrite the status quo, but Azerbaijan tipped its hand by preparing for war before the conflict erupted. Accurately reporting is not only a matter of journalistic integrity, it has important repercussions for the behavior of regional players. False equivalence between Armenia and Azerbaijan only serves to embolden the Aliyev regime in Baku.

If the international community truly wants peace and stability in the Caucasus, they must be clear in their condemnation of Azerbaijani aggression. Only by doing so can they hope to bring an end to Azerbaijan’s attacks on Armenia and make room for a diplomatic solution.

Raffi Toghramadjian is a senior majoring in Political Science and Finance at Boston College, where he is a member of the Gabelli Presidential Scholars Program and the Carroll School of Management Honors Program. He has previously worked as an Economic Research Intern for the Armenian Central Bank and is currently writing an Honors Thesis on Armenia's economy in the aftermath of the Velvet Revolution.

Editors note: This article was updated on the evening of September 30, 2020, to reflect the most current casualty counts.