From Russia with Missiles: China Is Preparing to Test S-400 Air Defense System 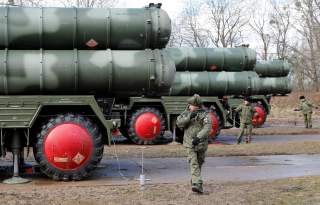 China is preparing to carry out its first test of the Russian built S-400 air defense system, according to Russian media outlets.

News of the test was reported on July 27 by TASS, a Russian media outlet.

TASS quoted “a military and diplomatic source” as saying, “It is planned that in late July-early August the unit of the Chinese People’s Liberation Army, which underwent training in Russia, will carry out the firing against a simulated ballistic target at a Chinese firing ground.”

The test is coming right on the heels of China receiving the first regimental set of the Russian built S-400 Triumf system. On July 26, a day before the report about the test, TASS said that the first systems had been officially handed over to China the week before.

TASS further quoted “a military diplomatic source” as saying, “Last week, an acceptance certificate was signed for the first batch of S-400 systems that was delivered from Russia by sea in May 2018. The systems passed over to China’s ownership once the documents was signed.”

Earlier, TASS had reported that the first S-400s were actually delivered to China in March or April 2018.

“Two vessels have delivered the first regimental set of S-400s from the port of Ust-Lug, Leningrad Region, to China within the time limit established by the contract,” a source told TASS in an article published on April 3.

That report noted that some of the equipment had been damaged while being transported and was, therefore, being sent back to Russia for repairs.

The S-400 is Russia’s fourth-generation air and missile defense system. It is currently Moscow’s most advanced deployed system, although a fifth-generation version, the S-500, is under development.

The S-400 is also mobile and is designed to counter many different aerial threats, from unmanned aerial vehicles (UAVs) and aircraft to short and medium-range ballistic missiles. Additionally, each system is armed with numerous missiles to engage different threats.

As Robert Farley has explained:

An S-400 battery has three kinds of missiles, each intended to engage aerial targets at different ranges. The longest ranged SAM [surface-to-air missile] can engage at 400 km, with shorter-ranged missiles compensating with enhanced capabilities for killing fast, maneuverable targets. The S-400 can also engage ballistic missiles.

S-400 is reportedly able to engage thirty-six targets simultaneously. According to some sources, every unit comes with eight launchers, each one of which is equipped with thirty-two missiles.

China is the first foreign customer of the S-400 system. The two sides first came to an agreement for the S-400 in late 2014. The deal is reportedly worth about $3 billion and will consist of four to six S-400 systems.

News of the sale was initially met with alarm in the region, especially with analysts focused on Taiwan, where it was believed the system could allow China could dominate the skies in any future conflict. As an article from Defense News noted at the time, “The 400-kilometer-range system will, for the first time, allow China to strike any aerial target on the island of Taiwan, in addition to reaching air targets as far as New Delhi, Calcutta, Hanoi and Seoul.”

But as some analysts like J. Michael Cole and Roger Cliff cautioned, this alarm was at the very least premature. That's because it is unclear how much range China's S-400s will have. As Farley noted, the S-400 can have a range of up to 400 kilometers depending on the missile used.

To reach that far, however, it must fire the 40N6E extended range surface-to-air missile. It was only recently that Russia announced its military had inducted the 40N6Es into service. There have been some reports that China is purchasing 40N6Es, but this doesn’t appear to have been confirmed by authoritative sources. This means without the 40N6Es, China’s S-400 systems have a range of only 250 km.

Arms sales are not the only military cooperation Beijing and Moscow have been up to recently. Last month, the two participated in a major military exercise that also included countries like Belarus, Azerbaijan, Kazakhstan, Armenia and Iran. For the first time, Beijing also sent H-6K long-range strategic bombers and Y-9 transport aircraft to participate in the drills.