Russia, Not NATO, Has the Upper Hand in Ukraine 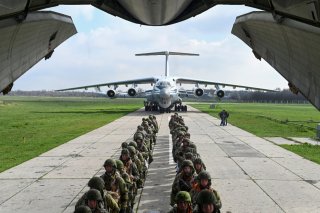 NATO’s pledge to defend Ukraine in its row with Russia raises the question as to whether the transatlantic alliance could keep its commitment. History, technical issues, changing global political order, intra-alliance problems, and a lack of public support in the West for a war with Russia are rendering NATO unable to counter Russia in Ukraine, as well as the rest of eastern Europe, making a Russian victory ever more likely.

At a time when the EU economies have already been devastated by the pandemic and the migrant-infused social unrest that is sweeping Europe, NATO members, particularly those in Eastern Europe, are unwilling to start a war that would devastate them.

NATO’s Black Sea littoral states Romania and Bulgaria, in particular, are expected to play a crucial role in the Ukraine-Russia conflict. Yet, they are aware that the benefits of getting along with Russia outweigh being NATO’s battering ram against Russia.

Bulgaria is predominantly dependent on Russian gas. Bulgaria’s pro-Russian president Rumen Radev has emphasized positive relations with Moscow to secure his country’s energy needs. The Bulgaria-Russia rapprochement has grown to a point where Washington felt compelled to threaten Sofia with sanctions for its involvement in the Turk Stream pipeline that carries Russian gas from Siberia to the Balkans.

Ukraine’s neighbor Romania, one of Europe’s poorest nations, is also cautious, treading lightly on the issue of the Ukrainian conflict. Russia provides more than half of Romania’s gas. Also, the NATO missile defense system in its territory is making Romania a prime target for Russian aggression. Moscow has warned Bucharest that it is “in the cross-hairs.” Vladimir Putin further hinted that Russia’s land grab, once it starts, will not be limited to Ukraine but will include Romania. In 2017, Putin presented his then Moldovan counterpart, Igor Dodon, with an ancient map of Moldova that included parts of modern Romania. Putin has a pattern of picking predominantly Russian-speaking regions of the countries to invade. In Ukraine, it is what is called the Novorossiya, which is the entire Southern Ukraine—bordering Romania—along the Black Sea. Back in 2014, Putin said, “I would like to remind you that what was called Novorossiya back in the tsarist days – Kharkiv, Lugansk, Donetsk, Kherson, Nikolayev and Odessa – were not part of Ukraine back then. Russia lost these territories for various reasons, but the people remained.” This brings up the likelihood of Russian boots stomping the Romanian-Ukrainian border.

The self-proclaimed Republic of Trans-Dniester, some sixty miles to the Romanian border, has pledged to join Russia. This alone will give Putin enough legitimacy to absorb the region. Ben Hodges, the former commander of the U.S. Army in Europe said Russia may invade Romania if they sense weakness in U.S. deterrence.

All things considered, Bulgaria and Romania, two important Black Sea nations, will be very reluctant to draw Putin’s wrath and will be careful with their NATO commitment.

Even Germany seems to have acquiesced to the Russian clout. With Covid-19 posing an existential threat to the very foundation of the European Union, economically and socially, the last thing Germany, the EU’s locomotive, wants is an impedance to recovery. Germany needs Russian energy and it is ready to confront Washington to this end. Despite the U.S. threat of sanctions, the Russian pipe-laying ship Fortuna resumed the Nord Stream 2 in the Baltic Sea earlier this year, with 150 km part left to be completed via Denmark to Germany.

Having lost thousands of fellow countrymen, and trillions of taxpayers’ money in Afghanistan and Iraq, Americans are tired of “forever wars” that they believe they have no business in. With more than half a million Americans dead from Covid-19, and social and economic troubles tearing the society apart, the Biden administration is going to have a very difficult time convincing the American public of the need to start a war with Russia over Ukraine that could end up in a nuclear holocaust. It is the same case in Europe. Unable to recover from the economic and social destruction of Covid-19, and the migrant crisis causing the rise of far right-wing politics, Europeans are not going to rush to Ukraine’s help. Worse, an all-out war in Ukraine will unleash a new wave of refugees right into the heart of Europe. Considering what the war in Syria did to the continent thousands of miles away, a Ukrainian refugee crisis could very well seal the fate of European democracies as we know them.

The Western euphoria of victory and Moscow’s relative weakness after the collapse of the Soviet Union created a dangerous slack among the NATO decision-makers who were too comfortable to create a “Russia plan,” until the Russian invasion of Crimea, after which time, it was too late. The eastern European members of NATO still considerably lag in upgrading their Soviet-era infrastructure, which is too old and incompatible to support modern arms. For instance, Poland and the Baltic NATO members have roads that cannot accommodate the more than sixty-ton M1 Abrams, Challenger II, and Leopard tanks. The situation in Poland, a prime target in a Russian invasion, is so grave that the EU had to fine the country for not constructing roads that would handle eight- to ten-ton semi-trucks. Furthermore, many eastern European tunnels and bridges are too narrow for wide transports. The rails on Baltic railroads are set apart wider than the Western standard, meaning that trains must be painstakingly unloaded, then reloaded near Poland’s border with Lithuania. It can add days to a major movement of troops. Elsewhere in eastern Europe, hindrances may quickly be multiplied. For example, there are instances where Hungarian border guards did not like the Romanian-approved way the Stryker armored vehicles were chained to rail cars, so the chains on all twelve trainloads had to be removed and refastened. Even in Germany, the Strykers missed their narrow window in the country’s teeming rail network and had to wait in line behind commuter and commercial train traffic. These types of logistical restrictions compel NATO to keep a considerably low number of tanks, 130, as opposed to Russia’s some 760 tanks within rapid striking distance of the Baltic states and Poland.

It would be no mistake to assume that the military planners in Moscow have a better picture of bridges, roads, and the point of weakness in the new NATO territories—because they used to be the Soviet Union’s. An example of a weak spot is the forty-mile-long Lithuanian-Polish border, also called the Suwalki Gap, that separates the Russian enclave Kaliningrad and the Russian satellite state Belarus. It is also called the new Fulda Gap. The Baltic states are connected to the rest of Europe via a highway and railroad, which are well within the range of Russian missiles in Kaliningrad. The war simulations showed that Russia would capture the Baltic states within sixty hours.

The European members of NATO themselves have little faith in the U.S.-led transatlantic alliance, such that in 2018, they began implementing a Euro-centric, united armed force called the Permanent Structured Cooperation Structure (PESCO) with the participation of twenty-five European states minus the United Kingdom and Norway. Washington’s Trump-era “American Euroscepticism” expedited this process which considerably freed Europe of American involvement. Naturally, the new European defense structure is creating friction between Washington and Brussels. The EU is erecting legal obstacles for outsiders to join the defense programs, making it very difficult for American defense contractors to be included in PESCO. This has caused uproar in Washington, triggering threats of retaliation against Europe.

Then there is Turkey, the second largest NATO member. The geostrategic aspect of the country makes Turkey an indispensable actor for Washington in countering Russia. However, Turks have been extremely frustrated by the Pentagon’s steadfast support for the YPG, the Syrian branch of Kurdistan Worker’s Party (PKK)—Turkey’s archenemy—and have been reluctant to cooperate with Washington. Turkey’s need to counter the YPG and Russia’s need to counter the United States in Syria prompted a symbiotic relationship between the two nations. Turkey purchased the Russian S-400 missile defense system, received Russian assistance to build a nuclear power plant, and has established a joint base in the South Caucasus. In turn, Russia helped Turkey dislodge the American proxy YPG from the Syria border by opening up the air space.

On the other hand, Turkey needs Ukraine’s decades-old experience to propel its already burgeoning defense industry. For instance, Turkey is using Ukrainian engines in its heavy attack helicopters and poised to purchase 50 percent of the shares of the Ukrainian engine-producing giant, Motor Sich. All these considered, Ankara is likely going to do everything in its power to preserve the status quo in Ukraine, which would undermine Biden’s plans to take on Russia. Let us not forget that then U.S. secretary of defense Donald Rumsfeld said that U.S. plans failed in Iraq because Turkey in March 2003 didn’t allow the United States to open a northern front in Iraq. Such is the case today, without the Turkish Straits and the Black Sea, there is no U.S./NATO superiority against Russia.