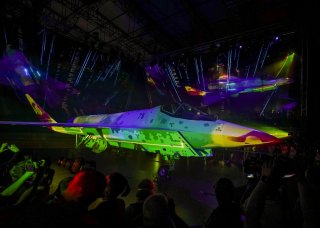 Several months after Russia revealed its newest and smallest stealth fighter, a slew of new images, video, and data reveals more about the airplane. But, the main development is that the Checkmate is not quite as small as imagined.

The Checkmate broadly shares some characteristics with the earlier and somewhat larger Su-57 stealth fighter jet. In particular, the two airframes have very similar wing sizes and forward fuselage sections. The two airplane’s tail sections differ significantly, however. While the larger, two-engine Su-57 opts for a more traditional canted tail and horizontal stabilizers, the Checkmate instead features a ruddervator that, with fewer surfaces, would presumably be stealthier than a conventional tail assembly.

Though Russia has advertised the Checkmate as a smaller alternative to larger, two-engine stealth fighter designs, it is by no means a ‘light’ fighter. On the contrary, compared to the Su-57, the Checkmate is not actually that much smaller and could be categorized as a medium rather than a light fighter. However, an overhead view of both fighters reveals just how similar they are and, in particular, their wing shapes.

TASS, the Russian state-owned news agency, recently released a slew of information about the Checkmate fighter, giving a range of stats and figures.

In addition to raw data on the fighter was its price-point: a very modest $30 million. This pales in comparison to the American F-35’s $80+ million price point depending on variant. Still, that low Russian sale price probably reflects a cheaper, baseline configuration that may sharply increase depending on customer configuration.

One of the images in the TASS release even showed the Checkmate sans canopy—an unmanned fighter. Could this be evidence of a concerted effort to develop a full-sized unmanned fighter? Or simply a futurist—though fanciful—rendering?

United Aircraft Corporation, the conglomerate that Russia’s aerospace heavyweights fold into, previously expressed the company’s intent to make the Checkmate pilot optional from the outset. While the engineering challenge presented by building an optionally-manned fighter is not insurmountable, it won’t matter if the Checkmate isn’t sold, either on the global defense market or at home to the Russian military.

Promotional material released before the Checkmate’s unveiling revealed a multinational cast, perhaps in hopes of drumming up sales internationally. While the airplane’s low price point would certainly be a boon to sales, it remains to be seen how successful the aircraft actually is.