Russia Wants Checkmate Fighter to Operate Alongside Su-57s and Drones 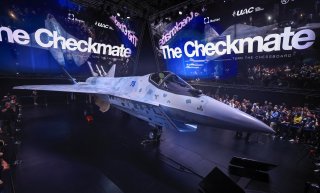 Russia's new Checkmate light tactical fighter only made its debut last summer, but the aircraft's manufacturer has touted its capabilities and said it would be capable of striking any target on a future battlefield. A spokesperson from the state tech conglomerate Rostec told state-owned news outlet TASS on Friday that the fighter is capable of accomplishing mission tasks without entering into an area controlled by an adversary's air defenses.

“The Checkmate fighter is outfitted with versatile armaments capable of fighting any threat: from unsheltered command posts to especially sensitive targets for a potential enemy,” the Rostec spokesperson said, according to TASS. “Importantly, the aircraft is capable of accomplishing any tasks outside the area of the operation of air defense weapons, thus saving the pilot's life.”

The Russian Air Force may also deploy the Checkmate with other fighters to further increase the effectiveness of the new fifth-generation, single-engine fighter.

Mikhail Strelets, the Checkmate's chief designer, told TASS the Checkmate could be used alongside the Su-57 fighter and unmanned aerial vehicles (UAVs) or drones for maximum efficiency with minimal operating costs.

“The trend for aircraft fleet unification is gaining traction worldwide these days,” Strelets said. “In view of the high degree of unification of these projects, a joint operation of Su-57, Checkmate and unmanned aerial vehicles may create the most balanced fleet for various purposes, which would have a minimum operating cost and high combat potential.”

The United Aircraft Corporation, a Rostec subsidiary, officially unveiled the Checkmate at the MAKS-2021 air show outside of Moscow in July. The aircraft will be presented internationally for the first time next week at the Dubai Airshow 2021 in the United Arab Emirates.

The Checkmate, which was developed from Sukhoi's Light Tactical Aircraft (LTS) program, utilizes advanced technology including an open architecture to meet customer requirements and unique artificial intelligence technology. The fighter also employs stealth technology, while it is equipped with an inboard compartment for air-to-air and air-to-surface munitions. It is reportedly capable of targeting and destroying up to six targets simultaneously.

The fighter is believed to be powered by Russia’s long-anticipated Izdeliye 30 engine, and boasts a modern glass cockpit with a similar layout to that of Russia's Su-57 fifth-generation fighter. It could have a maximum speed of Mach 1.8 with a combat range of 3,000 kilometers.

While Russia continues to highlight its capabilities, it is still in the prototype stage and likely won't perform its maiden flight until 2023 at the earliest.

In addition to the domestic market, the Checkmate is being developed as an export aircraft for use by African countries, and possibly India and Vietnam. It is expected to compete with the American F-35A Lightning II fighter jet and Sweden’s JAS-39 Gripen.

According to state media, the aircraft is likely to be designated as Su-75 and will be assembled at the Komsomolsk-on-Amur plant.