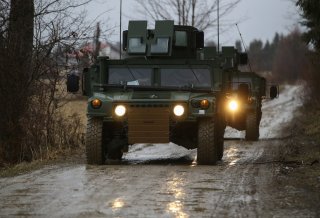 "It would be a very reckless and extremely dangerous decision,” Peskov said in a conference call.

He later added that a possible confrontation between Russian and NATO troops "could have clear consequences that would be hard to repair."

Peskov was referring to a proposal made last week by Jaroslaw Kaczynski, the leader of Poland’s ruling party after he and the prime ministers of Slovenia, the Czech Republic, and Poland arrived in Kyiv to show support for the Ukrainian war effort.

"I think that it is necessary to have a peace mission - NATO, possibly some wider international structure - but a mission that will be able to defend itself, which will operate on Ukrainian territory," Kaczynski said. "It will be a mission that will strive for peace, to give humanitarian aid, but at the same time it will also be protected by appropriate forces, armed forces.”

Other Western governments and NATO’s leadership have all but ruled out direct military intervention in Ukraine, whether on the ground or in the form of a no-fly zone in Ukrainian airspace. NATO officials have cautioned that such measures could cause escalation character when the alliance is primarily concerned with keeping the conflict from spilling over into a wider European war. Russian president Vladimir Putin previously warned that Russia will respond with overwhelming force to any Western attempts to intervene in Ukraine, later adding that the Russian military will treat any Western assets as enemy combatants.

Nevertheless, NATO is actively exploring options to establish a bolstered military presence on its eastern fringes. NBC reported this week that President Joe Biden, who is attending a NATO summit on Thursday, could announce plans to maintain a greater permanent troop presence on the alliance’s eastern flank near Ukraine.

“We are looking at additional troop posture adjustments,” an administration official told NBC. “At the summit, we expect NATO leaders to review the alliance’s current deterrent and defensive force posture, especially in light of the deteriorated security environment caused by Russia’s unprovoked and unjustified further invasion of Ukraine.”

The Department of Defense has provided Biden with a “series of options” for additional troops in eastern Europe, including larger forward deployments, a more robust rotational U.S. presence within NATO’s force structure, and even proposed constructing a new base in the region.