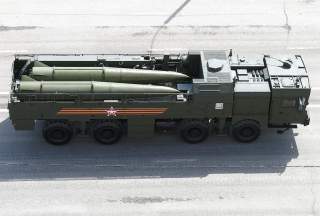 Russia says its enhanced air defense system in Syria can spot aircraft on airfields in Europe and Israel.

After a Russian surveillance aircraft was accidentally shot down by a Syrian missile during an Israeli air raid on September 18, Russia vowed to boost its electronic warfare defenses in Syria.

“Russia will jam satellite navigation, on-board radars and communication systems of combat aircraft, which attack targets in the Syrian territory, in the regions over the waters of the Mediterranean Sea bordering with Syria,” Defense Minister Sergei Shoigu threatened.

The threat seemed aimed at Israel, whom Russia accuses of timing its air strike to use the Il-20 aircraft as cover. But the latest boast seems aimed at America and Europe, as well.

“And all of this will be integrated under a common control system and we will know not only that someone has entered the airspace in this region but also that somewhere a plane is only operating on the runway, be it in Israel or Saudi Arabia or even in Europe, and we understand that is under control of the integrated air defense system,” he said.

Aircraft detected at an airfield will automatically be assigned a target number by the air defense system, which will offer operators various options. “Either radio-electronic reconnaissance, attenuation or electronic suppression or even, if we see that the situation is critical, fire to effect,” Mikheyev said.

Russia's heavy investment in an array of electronic warfare systems has stoked fears that in the event of war, Western equipment such as radars, radios, GPS and missile guidance systems could be jammed and rendered useless.

But long-range detection and jamming systems in Syria are particularly interesting, given that U.S. airstrikes in Iraq and Syria have been conducted by aircraft based in Italy and Turkey, while Saudi Arabia has been supporting rebels battling the Syrian government and its Russian and Iranian allies. Russia seems to be saying that it can monitor—and perhaps jam—Western, Saudi and Israeli aircraft even on their airfields.

Russia has stationed long-range S-400 anti-aircraft missiles—that can hit aircraft 250 miles away—on its bases in Syria. In retaliation for the September 18th Israeli strike, Russia is also sending S-300 missiles—with a range of more than 100 miles—to the Syrian military. An integrated air defense system with long-range radars, jammers and long-range anti-aircraft missiles could prove a strong deterrent against Western, Saudi and Israeli strikes.