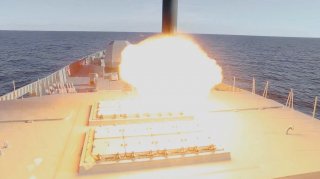 What do you give a world leader for his 68th birthday? In Russia, it is apparently a test launch of a hypersonic missile.

Russian state media has reported that on Tuesday the Northern Fleet's frigate Admiral Gorshkov successfully test-fired a Tsirkon hypersonic missile in the White Sea against a sea target 450 km away. Russian President Vladimir Putin was told of the successful launch on his 68th birthday on Wednesday.

Putin, who has pledged to increase Russia's military presence in the Arctic region, has talked up the potential of hypersonic missiles in past speeches and in a February 2019 State-of-the-Nation Address to the Federal Assembly said that the work on the Tsirkon was proceeding as scheduled. He claimed the platform was capable of developing a speed of about Mach 9 and its striking range capability could exceed 1,000 km, and moreover could strike both naval and ground targets.

"The work on the Tsirkon system and the stage of carrying out a successful test of this missile is a major event not only for the Armed Forces but for entire Russia, the entire country because equipping our Armed Forces - the army and the fleet - with advanced weapons systems, which indeed have no rivals in the world, certainly ensures our state’s defense capacity for many years to come," Putin said during a video conference meeting with Chief of General Staff Valery Gerasimov as reported by Tass.

Putin further praised the huge effort of the scientists, designers and "talented workers" and military specialists involved in the project.

"I want to congratulate all of you for this work and for its results and express hope that in the future all specialists involved in re-equipping the Russian army will work as effectively and persistently as they have done so far," Putin added.

The Russian military called the test a success, and stated that it accurately hit its intended target.

"The missile flew to a range of 450 km, climbing to a maximum altitude of 28 km," Gerasimov told state media. "The flight lasted four and a half minutes. The missile gained a hypersonic speed of over Mach 8 [eight times the speed of sound]."

This most recent missile test comes as tensions over arms control between the United States and Russia are on the rise. New START, which is the last major nuclear arms pact between the two nations, is due to expire next February.

However, Russia is not alone in rattling sabers or conducting tests of such weapons.

"The resurgence of great power competition between China, Russia and the U.S. has resulted in increased investment and interest in missile and missile defense systems by all parties, and the global market was valued at $45.5bn in 2019, according to GlobalData," said Anthony Endresen, aerospace and defense analyst at data analytics company GlobalData, via an email to The National Interest.

"Russian advances in hypersonic weapons are of strategic significance, in part because of the political significance of leading the way in deploying advanced technologies, but also because these weapons provide a new range of threats to adversaries, and, in Russia's case, offer a degree of asymmetrical threat," added Endresen.

The Significance of the Test

Putin has previously said that he doesn't want to start a new arms race with the west, but he has also spoken about how Russia’s modern nuclear weapons are "unequaled" and have the ability to hit almost anywhere in the world.

"Key to understanding the significance of these weapons entering the Russian arsenal is the fact that hypersonic weapons development is not in itself a race – given the inability to use them against each other," explained Endresen. "Rather, today's news of the test against a naval target demonstrates Russia's desire to use these weapons to markedly increase the strike envelope of weapons that do not currently have a counter or defense – particularly in the naval domain."

While the timing of the test wasn't likely to coincide with Putin's birthday it certainly may have been the present he wanted. The test was a warning to NATO and perhaps a demonstration should Russia opt to export the platform.

"Deploying such weapons would provide a useful means of asymmetrically, presenting a threat to tier one forces, namely NATO members and China," added Endresen. "A demonstration of the system will also be of great interest to other states – especially ones that Russia seeks to keep in its sphere or market such as India."