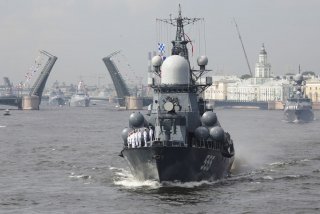 The Russian Navy has been increasing its drills, including exercises in the Black Sea, the Baltic Sea, the Mediterranean Ocean and recently in the Barents Sea. The drills in the Arctic came after U.S. and UK warships operated in the region for the first time since the Cold War. Russia’s Northern Fleet, which maintains the nation’s naval strategic nuclear forces, is headquartered there and has numerous bases in the Murmansk region.

The Barents Sea is now an area of renewed attention for the U.S. and its NATO allies amid tensions with Russia, and the U.S. Navy and its partners could be spending more time in the region to gain experience in dealing with the challenges—including the extreme cold—that the area poses to naval operations Business Insider reported.

Given that the U.S. and its allies could be seen to have been operating in what is essentially Russia’s backyard, it makes sense that Russia has stepped up its efforts to train in new anti-submarine tactics.

The new tactic was drafted last year, but only recently tested by the Russian Navy’s anti-submarine force according to reports from Navy Recognition. The group of warships includes several small anti-submarine vessels and some of the Project 22160 corvettes, which are equipped with modern sonars to detect submarines, torpedoes, and underwater combat swimmers. The corvette could provide guidance to the other warships that can engage an enemy with torpedoes and depth charges.

Submarine warfare expert Igor Kurdin told Navy Recognition, “Submarines are specifically vulnerable at the moment. Adversary aviation and mines are most dangerous and can block the exit from the base. A whole operation is necessary to let a submarine sail out. The submarines follow minesweepers which clear the route of mines. An attack force also sails out to search for adversary submarines.”

This could be a worrisome development for the U.S. Department of Defense (DoD). The U.S Navy’s nuclear-powered ballistic missile submarine (SSBN) force remains a central component of the United States’ nuclear arsenal. Plans are in place to begin replacing the aging Ohio-class within the next decade, but the cost of a dozen new Columbia-class submarines could limit the Navy’s efforts to regenerate the other forces that could be needed to address the combined challenges of Russia and China.

However, NATO forces have also been conducting their own anti-submarines drills as more non-NATO countries are fielding submarines. This included the Dynamic Manta 2020 anti-submarine warfare exercise, which brought together nine nations to test their respective anti-submarine warfare (ASW) capabilities from warships, maritime patrol aircraft, helicopters and submarines—and to improve the ability for NATO forces to work together. USNI News noted, “The ability for NATO to find, track and identify submarines is not just a matter of defense against Russia, but a matter of basic traffic safety on and under the Mediterranean.”