U.S. and UK Warships Operate in Barents Sea for the First Time Since the Cold War 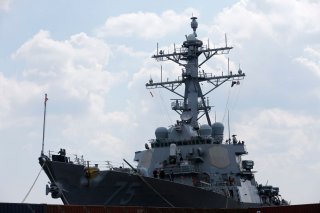 Four U.S. Navy warships from the U.S. 6th Fleet (C6F), along with one vessel from the Royal Navy, entered the Barents Sea off Russia’s northwestern Arctic coast on Monday. The ships worked together to conduct maritime security operations, assert freedom of navigation, and demonstrate seamless integration among allies in the challenging environmental conditions above the Arctic Circle.

The Donald Cook, Porter and Kent had recently completed a bilateral naval anti-submarine warfare (ASW) exercise in the Norwegian Sea, which reinforced the combined training that the vessels engaged in last month while participating in the UK’s Submarine Command Course (SMCC).

HMS Kent had been conducting maritime patrol duties in and around the UK before she joined the U.S. Task Group. She will continue the exercises with her close allies before she returns to her homeport to “thaw” out and undergo essential maintenance.

“In these challenging times, it is more important than ever that we maintain our steady drumbeat of operations across the European theater, while taking prudent measures to protect the health of our force,” said Vice Adm. Lisa Franchetti, commander, U.S. 6th Fleet. “We remain committed to promoting regional security and stability, while building trust and reinforcing a foundation of Arctic readiness.”

The recent exercise highlighted the need for allied and partner navies to remain proficient in all operating environments to ensure continued security and access to the seas. This is the first time that U.S. warships have operated in the international waters of the Barents Sea, which is akin to Russia’s naval backyard, since the 1980s. Russia’s Northern Fleet, which defends the far northwestern Arctic region surrounding the Kola Peninsula, is headquartered at Severomorsk near Murmansk.

“For more than 70 years, 6th Fleet has operated forces across the region in support of maritime security and stability. Our regional alliances remain strong because of our regular operations and exercises with partner navies, and we welcome this opportunity to work collaboratively at sea, while enhancing our understanding of Arctic operations,” said Franchetti about the recent ASW exercises.

The Russian Ministry of Defense (MoD) was notified of the visit to the region on May 1, and the notification was made in an effort to avoid misperceptions, reduce risk and to prevent inadvertent escalation. NATO and Russian militaries often find themselves operating in such close proximity around Europe.

NATO member Norway did not take part in the C6F operations to avoid escalating tensions with Russia.

“Norway welcomes more allied presence in our neighborhood,” Norwegian Defense Minister Frank Bakke-Jensen told The Barents Observer. “The United States contributes to NATO’s collective defense through more presence and training in Europe. The ongoing maritime activity is a sign of rivalry between the great powers. We want Norwegian forces to participate in this type of activities when it takes place outside Norway. This time it was not prioritized.”

The joint USN-Royal Navy exercise came just after two Russian Tupolev Tu-22M3 missile-carrying bombers were “shadowed” by F-16 fighters from the Norwegian Air Force earlier this month. Russia’s MoD said all the flights were “performed in strict compliance with the international rules of using the airspace.”