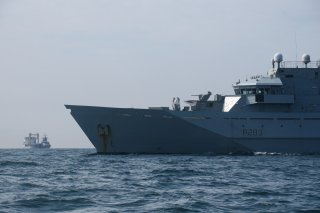 Amid heightened tensions with Moscow, last week the Royal Navy's offshore patrol vessel (OPV) HMS Mersey tracked and shadowed the Russian warship RFS Boiky in the English Channel. The Portsmount-based British warship was on routine security patrol when it was scrambled to track the Steregushchiy-class corvette.

The Russian warship had been previously tracked by the French Navy, highlighting the cooperative efforts of the NATO partners in the coastal waters near the France and the UK.

HMS Mersey reportedly "watched every movement" made by the RFS Boiky, which linked up with the auxiliary vessel RFS Akademik Pashin to refuel and transfer stores.

"Working to preserve the maritime security of the UK has always been one of the Royal Navy's very highest priority missions throughout our long history," said Lieutenant Commander Will Edwards-Bannon, commanding officer (CO) of the HMS Mersey.

"The need to fulfill this mission hasn't changed with the coming of the COVID-19 pandemic so, although we are living and working in slightly different ways on board to limit the risk from the virus, HMS Mersey's fantastic ship's company continues to work hard to protect our nation's interests," Edwards-Bannon added. "This work includes the close monitoring of foreign warships operating near to our shores, which is what we – along with our sister ship HMS Tyne – have been doing so far on this patrol."

HMS Mersey is a River-class OPV and is named after the River Mersey in the North West of England. The first ship to bear the name in eighty-four years, she was built by Vosper Thornycroft in Southampton to serve as a fishery protection vessel within the UK's waters. Mersey serves with her two sister ships HMS Tyne and HMS Severn, and all three were commissioned into service in 2003 to replace the five older Island-class patrol vessels.

Mersey and Tyne had joined the Royal Navy's Type 23 frigates HMS Kent, HMS Sutherland, HMS Argyll and HMS Richmond last month in a "concentrated operation" to shadow seven other Russian naval vessels that were reported to have "lingered" in the English Channel for several days while en route to Syria. Jane's reported that the Russian flotilla consisted of three of its latest Project 20380 Steregushchiy-class corvettes, two Project 775 Ropucha-class landing ships, and two Project 11365 Admiral Grigorovich-class frigates, plus auxiliary ships and tugs.

Last year HMS Mersey has been deployed to assist UK & French authorities with illegal migrant crossings in the English Channel. While the warship and her two sister OPVs had been slated to be decommissioned in 2019, in late 2018 the Ministry of Defence (MoD) announced that Batch 1 River-class ships would be retained in service for at least two additional years to bolster the UK's ability to protect its fishing fleet and shores. The Royal Navy currently provides around 200 days of fishery protection each year.