Russia vs. NATO: Welcome to the Fourth Battle of the Atlantic 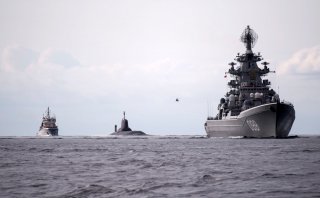 The Russian Naval and Air presence throughout the European and Arctic regions are inspiring what U.S. leaders are now calling the “Fourth Battle of the Atlantic.”

Citing a recent point at which as many as ten Russian submarines were found to be on patrol in the Atlantic theater, U.S. Navy Forces Europe/Africa Adm. James Foggo III said “We’ve entered what I call the Fourth Battle of the Atlantic,” according to a report in Seapower Magazine.

Foggo mentioned the ten Russian submarines, reportedly detected by Norweigan forces, represent a concerning part of a broader Russian campaign to gain tactical and strategic advantages in the Arctic. The Russians are adding a combat-capable ice-breaker, he said, and have place S-400 air defenses on several re-opened Soviet military bases in the region.

The Russian submarine threat is significant, as the country is reported by globalfirepower.com to have sixty-two submarines, just slightly less than the current U.S. fleet. Furthermore, the presence of S-400s is also a cause for major concern, as U.S. F-22 jets just intercepted four Russian spy planes near the Alaskan border, according to Air Force Magazine. While F-22 jets may indeed be able to operate in a vicinity with S-400s to a large extent, the presence of these kinds of advanced air defenses at very least complicates the threat equation for F-22 jets operating in the Arctic.

“The Tu-142s came within sixty-five nautical miles [74.8 miles] south of the Alaskan Aleutian island chain and loitered in the ADIZ for nearly eight hours,” according to a North American Aerospace Defense Command press statement that was cited in the Air Force Magazine’s report.

The combination of increased submarine activity, spy plane flights, armed icebreakers and advanced air defenses in or near the Arctic raises several strategic challenges for the United States, which is also accelerating preparations for stepped-up Arctic activity. The force posture and force movements do seem to indicate a scenario not unlike what Foggo describes as a “battle” for the Atlantic. More aggressive Russian activity is only likely to further speed up and intensify U.S. plans for the Arctic. All of this is taking on added urgency given that the Arctic ice is melting at a much faster pace than was previously expected, a phenomenon which will open new waters and further inspire a competition for resources and strategic advantage in the fast-changing region. Warm Gulf Stream waters, combined with higher temperatures and hotter sunlight continue to quicken the pace of ice melting. This environmental scenario continues to inspire Navy scientists and war strategists to employ drones to test water temperature, engineer newer kinds of ice-resistant, ship-mounted weaponry, and increase submarine patrols.

Another cause for U.S. concern can be found with what’s called the Northern Sea Route, a coastal waterway connecting key elements of the Russian Arctic border and part of Northern Europe to the Arctic. Greater Russian access to Arctic waterways, coupled with their having a greater number of ice-breakers, creates part of the dynamic which is inspiring the current U.S. effort to fast-track Arctic preparations.