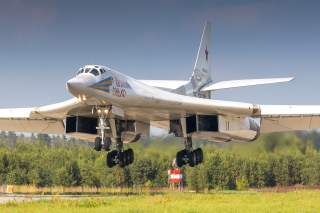 The Russian air force could receive the first of up to 50 new Tu-160M long-range bombers as early as 2021, defense minister Sergei Shoigu announced on Jan. 30, 2019.

The air force wants 50 of the swing-wing bombers. But that goal could prove unrealistic for the cash-strapped Kremlin.

In the early 2000s, Moscow paid Kazan, a subsidiary of Tupolev, to finish assembly of two incomplete Tu-160 airframes. As of early 2019, the Russian air force possessed 16 Tu-160s and at least 11 apparently were airworthy.

It's no wonder, then, that the Kremlin wants to sustain and even expand the Tu-160 fleet. In 2015 the Russian defense ministry announced it would restart Tu-160 production at Kazan and also modernize existing bombers for a future fleet of 50 Tu-160Ms.

A B-2 reportedly has a radar cross-section that's smaller than one square meter. The U.S. and Chinese air forces are developing new heavy bombers. Both countries have opted for flying-wing designs similar to the B-2, owing to the radar-evading potential of that planform.

The Kremlin has tinkered with its own stealth-bomber concept but apparently has made no progress actually building such a plane. Hence its strong interest in acquiring fresh Tu-160s, instead.

In stark contrast to the U.S. and Chinese air arms with their expanding acquisition of radar-evading planes, the Russian air force is unlikely to operate meaningful numbers of stealth aircraft for the foreseeable future. In late 2018 Moscow suspended production of the Su-57 stealth fighter after ordering just 22 copies including prototypes.

Russia spends just $70 billion annually on its armed forces, a tenth of what the United States spends. Even buying 50 new Tu-160s could prove too expensive.