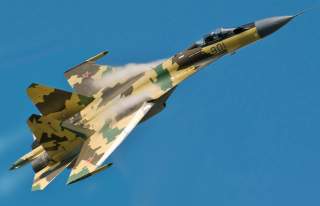 What good is buying lots of sophisticated combat aircraft if there aren’t enough aerial tankers to refuel them?

“With the growing activity of long-range aviation, as well as the deployment of Russian aviation units in the North and the Far East with their enormous distances, the need for tankers becomes even greater, both at the strategic and tactical level,” according to Russian newspaper Izvestia.

Older Russian and Soviet aircraft, such as the MiG-25, did not have the ability to be refueled in mid-air. But most modern Russian aircraft have that ability, including various models of the MiG-31, MiG-29, Su-30 and Su-24 fighter and strike aircraft. The Tu-160 Blackjack strategic bomber can be refueled in the sky, as can the Tu-22M3M, the newest version of the Tu-22M Backfire bomber. Russia’s new stealth fighter, the Su-57, has been practicing aerial refueling.

“But there are no refuellers,” laments Izvestia writer Ilya Kramnik. “For all this splendor, there is one regiment of tanker aircraft with 15 Il-78 and Il-78M aircraft built on the basis of the Il-76 military transport aircraft.”

“The growth prospects of this number also do not inspire optimism,” Kramnik adds. “Given the extremely difficult promotion of the updated Il-76MD-90A series, which is viewed as a platform for the tanker, and the needs of the Air Force both in transport vehicles themselves and in flying radar [aircraft], the number of tankers is clearly not large. It would be optimistic to assume that the United Aircraft Corporation will be able to transfer over a dozen Il-78M-90A aircraft in the next 10 years, which in the best case will increase the number of flying tankers in the Air Force to 30 aircraft, including the Il-78M.”

“Both 15 or 30 tankers are very few, considering that the number of aircraft capable of refueling in the air will grow,” Kramnik concludes. In addition to combat aircraft, he wonders whether Russian military transport aircraft will need to tank up while in the air. “Taking into account the shrinking fleet of military transport aircraft, it is possible that refueling will be needed in the future for them as a means to increase the fleet’s capabilities without increasing its number.”

Despite experimenting with air-to-air refueling in the 1930s, the Soviet Union considered aerial refueling of combat aircraft to be a mere “luxury,” according to Kramnik. A system was developed for the MiG-15 to be refueled so it could escort long-range bombers, but instead, the Soviets opted to increase the speed and maximum altitude of their bombers so they wouldn’t need fighter escort.

However, the Soviets realized that given the vastness of their territory, aerial refueling was necessary to keep their air force mobile. The first Soviet aerial tankers were converted M4 and Tu-16 bombers, which used wingtip-to-wingtip refueling instead of less hazardous techniques such as hose-and-drogue. Eventually, transport planes were modified into tankers.

The collapse of the Soviet Union disrupted Russian aircraft modernization. However, the Russian Air Force is emphasizing strategic mobility to quickly deploy its aircraft, just as the United States does. Aerial refueling has been used by Russian aircraft flying between Russia and Syria, and for Russian aircraft providing combat support to Syrian forces.

Kramnik suggests reviving plans, which had previously been canceled, to build tankers based on the Il-96 airliner. “If the Defense Ministry addresses it again, it will solve two problems: it will justify the costs of restarting the Il-96 without imposing it as a commercial civilian airliner, and possibly eliminate the need to use the Il-76MD-90A platform for tankers. A potential tanker on the basis of the IL-96, taking into account its size and carrying capacity, could satisfy the future needs of strategic aviation with an order volume of 30–40 aircraft for the next 15 years.”

Another option is converting existing Il-78 and Il-78M transports into tankers. Or, cargo versions of the Tu-204 airliner could be turned into refuelers.

Whatever Russia decides, it is learning a lesson that the U.S. Air Force has known since World War II: a combat air force is only as good as the support aircraft that sustain it.