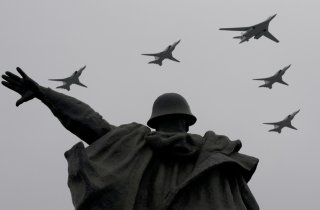 While the United States has responded to Russia's military buildup on the Ukrainian border with the deployment of B-52 Stratofortress bombers and F-15 Eagles to Europe, Russia has also deployed combat aircraft to bases outside of its national borders.

On Tuesday, Russian state media reported that Tu-22M3 bombers and MiG-31K fighters—both of which are capable of carrying Kinzhal hypersonic missiles—were deployed to Russia's Hmeymim air base in Syria to participate in the Russian Navy's Mediterranean maneuvers.

"The long-range aircraft involving Tu-22M3 bombers and MiG-31K fighters with Kinzhal airborne systems have deployed to the Hmeymim airfield for participation in the naval drills of the Russian Navy’s inter-fleet task force in the eastern Mediterranean," Russia's Defense Ministry said in a statement, according to a report from state media outlet TASS. "The crews of Russia's Aerospace Force have performed flights from their home airfields, covering over 1,500 km. During the exercise, the pilots of long-range aviation will accomplish assigned missions."

Hmeymim Air Base, also known as Khmeimim Air Base, is currently Russia's only military facility outside of the former Soviet Union. Built in mid-2015, the base is adjacent to the Bassel Al-Assad International Airport. Under an agreement with the Syrian government, Russia provides the air defense and internal policing of the base personnel while the Syrian military is charged with protecting the base perimeter.

In 2020, Syrian authorities agreed to give Russia additional land and coastal waters in order to expand the base. Upgrades to the facility have included an extension and resurfacing of the second runway, as well as the installation of new lighting navigational facilities and radio-technical equipment.

Russian media further noted that the deployment of the Russian combat aircraft follows a joint Naval exercise between France, Italy, and the United States which included the deployment of three NATO carrier strike groups in the Mediterranean Sea earlier this month.

Additionally, the strike group includes the guided-missile destroyers of Destroyer Squadron 28. The Royal Norwegian Navy's Fridtjof-Nansen-class frigate HNoMS Fridtjof Nansen is operating as part of the strike group throughout the entire deployment.

The deployment of the Tu-22M3 bombers and MiG-31K fighters is particularly notable because they are reported to be armed with hypersonic Kh-47M2 Kinzhal missiles.

The Kinzhal was one of several flagship weapons unveiled by Russian president Vladimir Putin during this state-of-nation address in 2018. Putin has emphasized the missile's speed and capacity to maneuver in mid-flight. It has an alleged range of 2,000 to 3,000 kilometers, which makes it a threat to critical land infrastructure and large surface targets such as aircraft carrier strike groups.