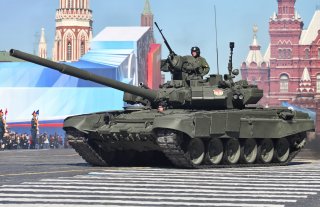 The Russian news agency TASS reported that the Russian military has taken delivery of the first batch of the upgraded T-90M "Proryv" (Breakthrough) main battle tanks (MBT). The tanks, which have a highly automated fire control system and a Kord 12.7mm heavy machine gun that can be operated remotely, were delivered to the 2nd Guards Motor Rifle "Tamanskaya" Division – more commonly known as the Taman Motorized Rifle Division – one of the elite Guards armored divisions of the Russian Ground Forces.

According to Russian state media, the new tanks will take part in the massive military parade to be held on May 9 in Moscow's Red Square to commemorate the 75th Anniversary of the Red Army's victory in the Great Patriotic War (World War II).

"First deliveries of upgraded T-90M 'Proryv' tanks started in April to the Guards Tank Army of the Western Military District, which is deployed on the territory of five Russian regions," said Army Commander Major-General Sergey Kisel. "These are fundamentally new combat vehicles, they got a new turret, a more powerful engine."

It is an improved version of the T-90A, and as noted it features a new turret that has multiple layers of armor plating, a modified ammunition storage area that is placed outside the main fighting chamber and notably has a more powerful 2A46M-4 main gun – the same as that on the T-14 Armata. It has a longer range and is reported to be 15-20 percent more accurate than the standard 2A46M gun of the T-90, yet it utilizes the same 125mm ammunition as the other Russian main battle tanks.

Secondary armament consists of a coaxial 7.62mm machine gun, while there is also a roof-mounted remotely-controlled weapon station that is armed with a 12.7mm heavy machine gun. Both weapons are operated under armor.

The T-90M is also equipped with a new multi-channel sight, which can allow the use of its weapons at any time of the day, and it can exchange data with other vehicles in real-time. Along with the Kalina automated fire control system, a proven carousel-type autoloader that holds 22 rounds, which are ready for use, and an improved fire extinguishing system the tank has increased combat capabilities as well as greater survivability for the crew. The T-90M also features a special anti-slip coating that is similar to that used on the latest T-14 Armata tanks.

The T-90 family of tanks has been described as a mix of old and new, relying on traditional Russian tank designs that have been standard since the Second World War, yet featuring true twenty-first-century advances into the automatically loading cannon that reduces the size of the crew and results in a small and combat weapon platform.

The final tests of the T-90M MBT were carried out this past February.