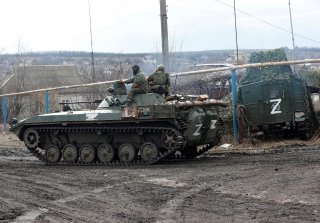 Russia’s parliament approved a new law on Friday that would criminalize the publication of information contradicting the Russian government’s statements on its ongoing invasion of Ukraine.

The State Duma and the Federation Council, Russia’s two houses of parliament, each voted unanimously to approve the draft law, banning “fake news” from being circulated. Western observers have noted that the new law could be applied to any commentary critical of the war, including describing it as a “war” rather than a “special military operation.”

The draft law was signed by Russian president Vladimir Putin on Friday and took effect on Saturday. Vyacheslav Volodin, the Speaker of the State Duma, celebrated the new law.

“It is possible that by [Saturday], its rules will force those who lied and made statements discrediting our armed forces to bear very grave punishment,” Volodin said. “I want everyone to understand, and for society to understand, that we are doing this to protect our soldiers and officers, and to protect the truth.”

The law orders fines and prison terms of up to three years for the sharing of false news about military actions in Ukraine. For information that leads to “severe consequences” for Russian forces, sentences can be extended to up to fifteen years.

Although Russia’s few remaining liberal media outlets, including the Novaya Gazeta, condemned the law, they agreed to obey it. Novaya Gazeta removed several articles from its website detailing Russian military actions in Ukraine, although it insisted that it would continue to report on Russia’s deepening domestic economic crisis, which the law did not include as a restricted topic.

Other news outlets, including the BBC’s Russian-language service, indicated that they would suspend their operations within Russia until the practical effects of the law could be determined. The Russian-language service will continue to operate from outside the country, although its broadcasts have been blocked by Russian authorities.

As Russia’s invasion of Ukraine has ground to a near-halt in the face of Ukrainian opposition, thousands of Russians have launched protests against the war. The Kremlin has pushed back by asserting increasing control over the country’s information sphere. Consequently, several independent Russian media outlets, including the “Ekho Moskvy” radio station and the “Dozdh” TV channel, were closed last week under threat from Russian authorities.

The government also blocked the broadcasts of several Western-run news organizations, including the BBC, Voice of America, and Deutsche Welle, claiming that they had spread “false information” about the ongoing conflict.