Russian Journalist Fined After Protest Against the War in Ukraine 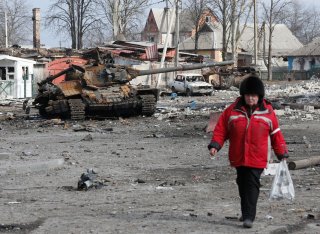 Marina Ovsyannikova, a Russian journalist and news editor who received worldwide attention on Monday night after holding up a poster reading “No War” during a live television broadcast, has been fined and released for the time being by a Russian court.

For roughly five seconds, Ovsyannikova’s protest display was broadcast on Russia’s Channel One station. Her poster said “No War” in English and “Stop the War,” “Don’t believe the propaganda,” and “They are lying to you” in Russian. During her appearance, she shouted, “Stop the war, no to war” as the anchor continued to read her news broadcast.

The court did not charge Ovsyannikova for her appearance on television, but for an earlier anti-war message posted to her social media accounts. She was convicted of violating Russia’s protest law, an administrative charge similar to a misdemeanor conviction in the United States, and was ultimately fined 30,000 rubles, or roughly $280.

Ovsyannikova’s lawyers noted that Russian authorities could still press far more serious charges, although they have not yet done so. By protesting the war, Ovsyannikova may have fallen afoul of a new rule prohibiting criticism of Russia’s military, which carries a punishment of up to fifteen years’ imprisonment.

Ukrainian president Volodymyr Zelensky thanked Ovsyannikova for her stand during his daily video address, insisting that it showed many Russians were opposed to the war and understood the extent of the Russian government’s influence in the country’s media.

“I am grateful to those Russians who do not stop trying to convey the truth,” Zelensky said. “To those who fight disinformation and tell the truth, real facts to their friends and loved ones. And personally to the woman who entered the studio of Channel One with a poster against the war.”

Kremlin spokesman Dmitry Peskov denounced the protest as a form of “hooliganism” on Tuesday, praising the television channel for its daily news coverage of the events in Ukraine and suggesting that an internal investigation would take place within the studio.

In her original social media statement, Ovsyannikova announced that she was “ashamed” of working for Channel One, which she accused of uncritically broadcasting Kremlin propaganda. She noted that her mother was Russian and her father was Ukrainian, describing the conflict as a “fratricidal war” driven solely by the personal desire of Russian leader Vladimir Putin.

Russian media, which is largely controlled by the Russian government, is the primary source of news for most Russians. Its broadcasting has largely adhered to the Kremlin’s line in Ukraine, describing the war as a “special military operation” intended to “demilitarize and de-Nazify” the government in Kyiv.

Russian media outlets have also described the Ukrainian government’s treatment of its ethnic Russian minority as a “genocide,” a descriptor that Kyiv has vigorously denied.