Russian-Made S-300s vs. Israeli Stealth F-35s: Who Wins in a Shootout? 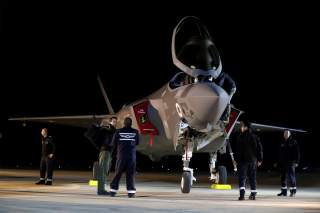 The presence of additional Russian-made S-300 batteries in Syria complicates matters for both the United States and Israel.

Russia has delivered the formidable S-300 air and missile defense system to Syria.

However, it will still take several months for Assad regime crews to learn how to operate the sophisticated air defense system under Russian tutelage. In the meantime, the weapons are almost certainly going to be operated by Russian military advisors. The presence of Russian forces means that Tel Aviv might be temporarily constrained against striking at those S-300 missile batteries, if it were so inclined. But in strictly military terms, the presence of those weapons does not necessarily limit Israel’s ability to do so. Israel’s new fleet of stealthy Lockheed Martin F-35I Adir versions of the Joint Strike Fighter afford Tel Aviv the ability to defeat the S-300 with relative ease.

“The operational abilities of the air force are such that those (S-300) batteries really do not constrain the air force’s abilities to act,” Tzachi Hanegbi, Israel’s regional cooperation minister, told Israel’s Army Radio reports the Reuters news agency. “You know that we have stealth fighters, the best planes in the world. These batteries are not even able to detect them.”

One of the F-35’s primary missions from its very inception has been the suppression (SEAD) and destruction (DEAD) of advanced enemy air defenses such as the S-300. Indeed, the F-35 will only become more formidable in the SEAD/DEAD role as time goes on and the aircraft is upgraded with the full operational capability Block 3F and subsequent Block 4 software and hardware configurations. Tel Aviv declared its F-35s operational in December 2017  and recently signed an agreement in February with Lockheed Martin to incorporate Israeli specific modifications to bring its planned 50-aircraft fleet to a Block 3F+ configuration by December 2021.

Even without the full Block 3F capability immediately available, Tel Aviv’s F-35 fleet would offer the Israel Defense Force a potent capability to strike against Syria’s newly acquired S-300s, certainly a better capability than offered by any conventional fighter. However, there is little prospect that Israel would attack those batteries while the Russian still more or less have those weapons under their direct control.

According to the Russians, it will take roughly three months for them to train Syrian S-300 air defense crews. "We have finished personnel recruitment and have begun to train them," Russian Defense Minister Sergei Shoigu said on Tuesday according to the state-owned TASS news agency.

Shoigu also officially confirmed that the Russians have delivered the S-300 to Syria. "In conformity with the presidential decision, we have begun to carry out a number of measures to reinforce Syria’s air defense systems in order to ensure better protection for our servicemen,” Shoigu said. “We have completed the delivery of S-300 systems. It included 49 pieces of equipment, including radars, control vehicles and four launchers."

While the Syrian forces are being trained, Russian forces are likely to retain control of the S-300s and operate those weapons under their direct supervision. Such an arrangement should prevent any rash actions by the Syrian regime and also put a brake on any Israeli plans to strike at the missile batteries. However, the Israelis might consider eliminating those S-300 batteries if the Russian do in fact hand them over to Syrian control. That is not a foregone conclusion given that it was Assad’s poorly trained and motivated air defense crews who shot down the Russian Il-20M Coot intelligence-gathering aircraft on September 18, sparking the current tensions in the first place.

The presence of additional Russian-made S-300 batteries in Syria complicates matters for both the United States and Israel. Washington decried the Russian move as escalatory. “I’m certainly not going to comment on our intention on how we will address that, but my comments before were true,” Secretary of State Mike Pompeo told reporters on Oct. 3. “Having the Russians deliver the S-300 into Syria presents greater risk to all of those in the affected areas and to stability in the Middle East. We consider this a very serious escalation.”