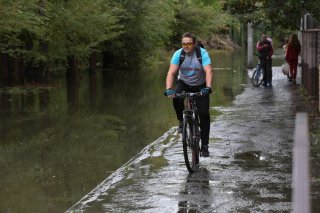 “The water pumping station was destroyed. The river broke through the dam and overflowed its banks. Residential buildings are just a few meters away from the river,” tweeted Ukrainian politician Inna Sovsun. Oleksandr Vilkul, the head of Krivyi Rih’s military administration, said in a post on Telegram that as many as 112 homes were flooded but that work is underway to repair the dam. Water levels of the Inhulets River, part of which runs across the city, reportedly rose by about 2.5 meters in the Russian strike’s aftermath. Photos and video footage published on social media appear to show significant flooding in parts of the city. Evacuations were announced in the city’s Inhuletskyi and Tsentralno-Miskyi districts, according to Ukrainian News. According to unverified Ukrainian reports, emergency responders decided to explode the dam in two places to reduce the Inhulets’ water level. It remains unclear to what extent Ukraine’s emergency services have been able to contain the damage.

Vilkul reported another missile strike on Kryvyi Rih on Thursday, noting that Russian forces targeted the city’s hydraulic facilities for a second time. “Stay in shelters. Don’t take photos or videos or share them on social media,” he added.

Ukrainian president Volodymyr Zelenskyy, who was born in Kryvyi Rih, condemned Russia over the strike in a Thursday address. “Everything is being done to eliminate the consequences of yet another vile Russian act,” he said. “You are weaklings who fight civilians. Scoundrels who, having escaped from the battlefield, are trying to do harm from somewhere far away. You will remain terrorists of whom your own grandchildren will be ashamed,” Zelenskyy added.

Russian military observers said the attacks on Krivyi Rih’s hydraulic infrastructure are intended to impede Ukrainian troops’ river crossings in the ongoing Kherson counteroffensive. Earlier this month, the Ukrainian military tried to break through Russian defensive lines at several points along the Mykolaiv-Kherson border. There has been little verified information on Ukraine’s progress in that campaign, which has reportedly encountered stiff Russian resistance.