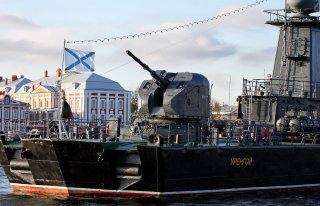 The Russian Navy has continued to conduct military drills against hypothetical enemy attacks. The latest came earlier this week when the Russian Baltic Fleet "repelled" and enemy airstrike in the Gulf of Finland. Crews of the small anti-submarine warfare ships Urengoi and Kazanets fired at the notional, or theoretical, air targets.

"During the planned drills, the crews of the small anti-submarine ships Urengoi and Kazanets conducted artillery firings against air targets in the Gulf of Finland and practiced measures to thwart attacks by a notional enemy’s air attack weapons from various altitudes and directions," the press office said in a statement as reported by Russian state media.

The crews of the Parchim-class corvettes, a class of warships that actually developed for the East Germany Navy in the 1970s, fired from the AK-176M and AK-630M artillery guns. The ships' crews also laid defensive minefields using dummy mines, which were later cleared by a harbor minesweeper.

In a separate exercise, pilots form the Northern Fleet conducted flight tactical exercises to intercept airborne targets of a mock enemy in the skies near the Arctic. The exercise, which took place during daylight hours, involved 10 crews conducting combat training tasks in five MiG-29K carrier fighters, a 4++ generation, multifunctional aircraft designed to provide a defense of naval formations, to gain air supremacy and to destroy surface and ground targets.

Flights took place from the Severomork-3 airport in the Murmansk region. During the drills, pilots practiced intercepting the enemy in a different range of heights and speeds over the Barents Sea, and the crews performed tactical aerial combat with missiles and airborne artillery to hone piloting techniques and to coordinate actions in a group.

These most recent drills in the region followed anti-ship drills in the North Sea that were conducted in March. The Baltic Fleet’s Project 20380 corvettes Steregushchiy and Soobrazitelny conducted notional missile launches against enemy combat ships. The corvettes delivered missile fire simultaneously, which notionally struck all the designated targets. The crews also practiced electronic measures.

In addition, in April the patrol vessel Vasily Bykov and the small anti-submarine warship ships Kasmov and Yeisk held drills in the Black Sea to search for and track a simulated enemy submarine.

The Russian Navy has continued to conduct such exercise operations, and while these most recent drills have been small in scale, last August the Baltic Fleet took part in a combat training event that involved more than 4,000 personnel and more than 20 warships. The Russian Navy's "Ocean Shield-2019" exercise also included about 20 aircraft and helicopters, including aviation from the Pacific Fleet. The crews performed about 100 combat exercises during the drills.

More recently the Russian Navy was joined by the Japanese Maritime Self-Defense Force destroyer Harusame in the first-ever joint anti-piracy drills in the Arabian Sea. The Russian Yaroslav Mudry guard ship, the Yelnya tanker and the Viktor Konetsky tugboat practiced liberating a ship captured by simulated pirates. The tanker played the role of the captured ship.