The Russian Navy: A Submarine Powerhouse? 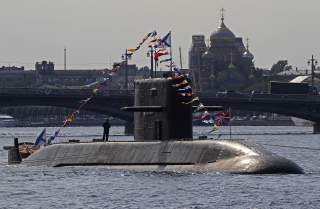 Following a decade of economic crisis that ended in the early 2000s, the Russian navy is in a period of modernization and reorganization. For the surface fleet, this evolution means fewer big ships and more new small vessels, many of them carrying powerful Kalibr cruise missiles.

Under the sea, things are different. Where the Russian navy is all but abandoning production of new aircraft carriers, cruisers and other “blue-water” surface warships, it has recommitted to sustaining a large fleet of big, long-range submarines.

“Although the navy is mainly made up of Soviet-era surface ships and submarines, an extensive modernization program is underway, focusing first on the submarine force,” the U.S. Defense Intelligence Agency reported in 2017. “Progress in submarine modernization is underway.

As recently as 2017, the Russian fleet operated 61 submarines. “Historically the backbone of the Russian navy, 75 percent of the 61 operational submarines are over 20 years old and are slowly being replaced,” the DIA explained.

“Russia will continue production of its fourth-generation Dolgorukiy-class submarines through 2020,” the DIA reported. “There are currently three in service, with an additional eight scheduled to enter service in the coming years.”

The first of up to 10 Yasens was delivered to the navy in 2014, “but the program has encountered delays,” the DIA noted. “The flagship of the class (hull one) required 16 years to complete; hull two should soon be completed after seven years.”

The improved Kilos, by contrast, have speeded through production “without significant delays,” according to the DIA. “The initial order of six was expanded to 12 in early 2016. The first three Kilos were delivered to the Black Sea Fleet in 2014 to 2015.”

Assuming budgets remain at their current level, in the 2020s the Russian submarine fleet could include the 11 Boreis, 10 Yasens and 12 improved Kilos plus a couple dozen older submarines including early-model Kilos, the one-off experimental diesel boat Petersburg plus upgraded Akula, Oscar and Sierra attack submarines, for a grand total of probably fewer than 50 vessels.

Most of the nuclear-powered ships belong to the Northern Fleet. The Pacific Fleet operates a few nukes. The non-nuclear boats are spread across the Northern, Pacific, Baltic Sea and Black Sea fleets.

The Yasens, in particular, pose a serious threat to enemy forces. The class is “extremely quiet and is armed with a wide range of advanced cruise missiles to destroy enemy ships and targets ashore,” the DIA explained. The improved Kilos also can fire cruise missiles such as the Kalibr.

But Owen Cote, an expert in anti-submarine warfare at the MIT Security Studies Program, cautioned against overestimating the Russian submarine fleet’s effectiveness.

It costs Russia around a billion dollars to build a new nuclear submarine. An American sub, by contrast, costs around $2 billion. The main difference is that the Russian military budget is around $70 billion annually. The U.S. defense budget tops out at around $700 billion.

The U.S. Navy aims to maintain a fleet of around 50 attack submarines, roughly the same number the Russians possess. But the Americans can much more easily afford their subs.

“It remains to be seen, when and if these things will get out there [and] can they go to sea?” Cote said of the Russian boats. “The Russian navy right now is just a complete disaster, and on the margins they can get better, but to really get our attention they have to build 10, 20 of these things. And there are no signs they’re going to do that. I don’t think they have the money for it.”