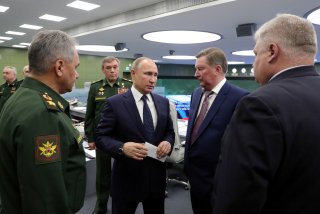 The Russian media is reporting that its country’s air defenses will easily provide an effective defense against the just tested U.S. hypersonic missile, a claim that is unverified but difficult to envision.

Stealth fighter jets capable of exceeding the speed of sound are already in a position to have some success eluding precise engagement or “targeting” from Russia’s best S-400 and S-500 air defenses. So what does a U.S.-launched hypersonic weapon traveling at five times the speed of sound mean for the Eurasian country?

“The parameters that the Americans have disclosed do not exceed those declared in Russia,” Ivan Konovalov, the development director of the Foundation for the Promotion of Technologies of the 21st Century, told Russia’s TASS news agency. Russia’s newest air defense systems are an excellent defense against this weapon.

America’s Hypersonic Air-Breathing Weapons Concept (HAWC), which is a joint program between the Defense Advanced Research Projects Agency and the Air Force, is moving toward operational status as part of a vigorous push by the Defense Department to match or exceed established Russian and Chinese hypersonic weapons capability. Defending against an attack via hypersonic weapons, however, likely requires a level of speed, computer processing, fire control and weaponry not likely to exist in even the most modern Russian air defenses. Even if an advanced Russian air defense radar system, such as those now networked together by digital processors and highly sensitive and precise long-range radar, was able to detect or discern that a hypersonic missile was “on the way,” the challenge of actually establishing an “engagement” track would be difficult. If establishing a targeting track on a fifth-generation fighter jet is a challenge for Russian air defenses, then what might that mean when it comes to defending against a maneuvering hypersonic missile traveling at five times the speed of sound? Detecting that a threat is approaching, even if a high-fidelity rendering or radar return signal were possible, and generating a targeting “track” that is precise enough to strike or intercept a target are two different things. This is one reason why many airpower advocates insist on the continuation of stealth technology. Clearly, a hypersonic missile is likely to be more difficult to counter than an F-22 Raptor or F-35 fighter jet.

“These tests are not trustworthy,” Konovalov told the TASS news agency. “First, the Americans said that they need far more time. Then there was a series of unsuccessful tests. Now they say that the research and development for this weapon has been completed and thorough flight tests carried out.”

The editor-in-chief of the Arsenal Otechestva (Arsenal of the Fatherland) magazine, Viktor Murakhovsky, claims that the technology demonstrated by the HAWC represents a level of performance that Russia achieved during its days as the Soviet Union.

“Judging by what the Americans have disclosed, they have tested a hypersonic cruise missile demonstrator, capable of developing a speed of Mach 5,” Murakhovsky, told the TASS news agency. “The Soviet Union reached this stage back when it was creating ‘product 4202,’ a hypersonic warhead.”